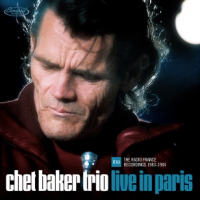 Aside from a new album by a favourite musician, few things hold so much promise as the release of a previously unavailable recording—and if it comes up to expectations, rather than being a barrel-scraping exercise, one has lucked out. Live In Paris: The Radio France Recordings 1983 -1984 hits the sweet spot. Available as a 3 x LP box set from April 23, 2022, which is Record Store Day, and a week later as a 2 x CD box, these live performances by one of Chet Baker's hottest late-period groups have only previously been accessible on application to France's L'Institut National De L'Audiovisuel (INA), which has archived them on behalf of Office De Radiodiffusion-Television Francaise (ORTF). That hardly qualifies as public domain, so the Elemental label's release is effectively the first one.

The discs document two performances in Paris, the first an open-air gig in June 1983 at L'Esplanade De La Defense, the second a club appearance at Le Petit Opportun in February 1984. Baker was in the final stage of his career (he passed in 1988) and was going out in a blaze of heroin and cocaine use, his drugs of choice since the late 1950s. When the stars and the connections were in alignment, magic ensued. When they were in opposition, chaos ruled. In an interview for Matthew Ruddick's assiduously researched Funny Valentine: The Story Of Chet Baker (Melrose, 2012), bassist Ron McClure says that by the 1980s the drugs had so ravaged Baker's movie-star good looks that "he looked like twenty miles of bad road." But that must have been on a bad day, because in Franck Bergerot's photos from the L'Esplanade gig, which illustrate the CD set's forty-page booklet, Baker looks pretty good for his age, all things considered.

Indeed, even at fifty-four years, it is easy to see why trumpeter Jack Sheldon, speaking in Bruce Weber's flawed but fascinating 1988 Baker documentary Let's Get Lost (see the YouTube below), says it was still hard to hang on to a sexual partner if Baker was in the vicinity—"even," Sheldon deadpans, "if you were actually having sex with the person in question at the time." (Of course, by this time, getting laid had long been way down Baker's list of priorities).

Anyway, the music. At both performances, Baker fronts a drum-less trio, his preferred lineup, where the pulse is kept by the bassist and the decibel count is low enough to let Baker's breathy, intimate trumpet (and singing) shine. Baker's rhythmic sense was in any case as strong as his lyrical one; he needed no drummer. And at both performances, the trio includes pianist Michel Graillier, another profoundly lyrical player, who frequently accompanied Baker during his final decade. There are two bassists: Dominique LeMerle , a third lyricist, at L'Esplanade, and the more propulsive Riccardo Del Fra at Le Petit Opportun. It was Graillier and Fra who accompanied Baker on Mr B (Timeless, 1984), which is one of Baker's top ten greatest studio albums.

Baker sings on just three tracks, which, for members of the jury who are still out on his vocals, is no bad thing. There is also a good mix of up-tempo hard boppers and slow-tempo ballads. The former include Hank Mobley's "Funk In Deep Freeze," Horace Silver's "Strollin'" and Richard Carpenter's "Walkin,'" and Baker is on song on all of them. But it is two ballads that are the collection's crown jewels: Ralph Rainger and Leo Robin's "Easy Living" at L'Esplanade and J.J. Johnson's "Lament" at Le Petit Opportun.

The musician and writer Mike Zwerin summed up Baker's talent well in his memoir Close Enough For Jazz (Quartet, 1984): "You do not generally feel like jumping up and shouting 'Yeah!' after a Chet Baker trumpet solo," wrote Zwerin. "All that tenderness, turmoil and pain has driven you too far inside. He reaches that same part of us as a late Beethoven string quartet, a spiritual hole where music becomes religion... ... It is summertime, and the living is not easy."

Having said that, there can be moments when, listening to Baker, a chill runs up the back, as though a demon has clasped one's spine. Is this because of something inherent in the music, or is it one's mind struggling to hold on to, on the one hand, sublime music, and, on the other, the ugly reality of Baker as self centered and self indulgent and a spectacularly lousy husband and father? Either way it is a salutary experience—but it does not for long get in the way of hitting the replay button.

P.S. Fellow musicians mostly spoke fondly of Baker. Not so record company executives and club owners. If you want to get a taste of the naysayers, check Riverside cofounder Orrin Keepnews' liner essay on the 2007 Keepnews Collection reissue of Chet (Riverside, 1959). Keepnews, writing some fifty years after the event, still loathed Baker and shares some of the reasons why.

CD 1: There Will Never Be Another You; Easy Living; But Not for Me; Stella by Starlight; Funk in Deep Freeze; Just Friends. CD 2: Arbor Way; Strollin’; Margerine; Lament; Walkin’.