By Jeff Dayton-Johnson
January 1, 2009
Sign in to view read count 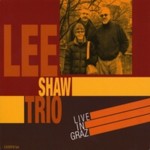 Live in Graz gives listeners a chance to catch up with one of the more improbable second acts in jazz: that of eighty-something pianist Lee Shaw. A poised Shaw usefully recounts the biographical details in the accompanying DVD (which is unfortunately somewhat shoddily produced): she acquired a broad musical education in tiny Ada, Oklahoma; later continued that schooling, playing requests in Chicago nightclubs; then, for many years, she backed up "horn players from the city" at clubs in Albany, New York, with her late husband, the drummer Stan Shaw. Along the way, it turns out Shaw was the missing link between Oscar Peterson, who offered her sporadic lessons well into her professional life and John Medeski (later of Medeski Martin & Wood), who was her student as a Florida adolescent.

Overall, an unusually prosperous living for the jazz world, and not without its flashes of artistry. In Shaw's gracious testimony, however, one detects the faintest trace of regret, of a longing for a different kind of jazz life. For example, Shaw, a prodigious composer for years, never performed her own tunes. Meanwhile, over the years, headline jazz stars—like Lionel Hampton—asked Shaw to join their groups, but she never succumbed to these invitations.

And now, finally, the prodigiously gifted pianist is living that other jazz life, entering the international jazz circuit with this sympathetic trio. This live CD mixes her idiomatic originals in with well-chosen covers, both celebrated and obscure: Ahmad Jamal's "Night Mist Blues," in which Shaw wittily alludes to the set's opener, Billy Taylor's "Easy Walker"; and Leonard Bernstein's "Lonely Town," an affecting solo number from the DVD.

The record reveals Shaw the soloist to be squarely in the Peterson-Medeski lineage, but that hardly begins to describe her gifts. Bold and strong, her playing lavishes attention on the lower and middle ranges of the keyboard, and—metaphorically—on the architectural and emotional resources of the compositions. An emblematic case in point is her solo on Vincent Young's "Street of Dreams," a harmonic edifice carefully constructed, brick by brick. Shaw's impressionist compositions, meanwhile, are song-like, deceptively simple, but with vast musical reserves lurking just beneath the surface.

These are long takes, allowing all three musicians plenty of time to develop ideas in unhurried solos. Bassist Rich Syracuse and drummer Jeff Siegel are well-matched to the leader's strengths: each plays well inside the tradition but with a bracing, percussive boisterousness.

Let's hope that Shaw's second act is a long one: between the growing Shaw songbook and the hundreds of songs by others that the pianist has played hundreds of times, she quite clearly has a lot to communicate to a wider audience.