Phish: Phish: At The Roxy

By Doug Collette
January 2, 2009
Sign in to view read count 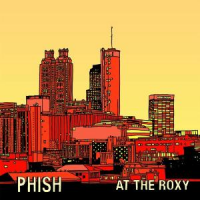 Because Phish have announced their reformation with three shows due in March of 2009, after four years away, there's a certain circular logic that extends to the history behind the 8-CD set At the Roxy. These Atlanta 1993 shows represent the first extended run for the Vermont-based group, as Phish's popularity had not reached its flashpoint yet. Only the most skeletal details appear in this minimalist package, as the graphics resemble nothing so much as a budget item created for mega stores and the artwork, including the individual disc sleeves, lacks the usual continuity that adorns such packages.

But such niceties become moot once the music starts. There's no self-imposed pressure when a cover, in this case Rolling Stones' "Loving Cup," begins set one. Phish are sufficiently loyal to the original but reside at an intensity level far below that of "Split Open and Melt" and by the time "Colonel Forbin's Ascent" proceeds very far, anyone (devoted fan or more objective music lover) who has listened to Phish truly open up, may wish the quartet was engaging in more extended improvisation than the ostensibly meaningful (nonsensical) wordplay guitarist/vocalist/composer Trey Anastasio engages in.

At least the birthday tribute to drummer Jon Fishman at the end of set one—including a tongue in cheek tease of Led Zeppelin's drum solo vehicle "Moby Dick"—leads without discernible pause into a fiery instrumental extension of "David Bowie." "Runaway Jim" continues at that same intense level, as Phish radiate a deep sense of joy in the playing and singing. Still, the question arises why every set here includes an abbreviated faux bluegrass number like "Paul and Silas." This particular romp has little to do with the exploratory likes of the piano intro to "You Enjoy Myself" and it's questionable it carries any tangible musical logic. Likewise, the acapella rendition of "Amazing Grace" is a non sequitur, which, like much of Phish's original material, doesn't reveal how deeply into the cheek the collective tongue resides.

Suffice it to say, such interludes will satisfy the completists and Phish-heads, but leave the more objective listener longing for judicious edits. But the other distinction of At the Roxy lies in the non-stop second set of February 20,1993. In place of the fitful momentum in place the prior evening, the quartet roars from the beginning this night, playful and purposeful, even on a cover of Kiss' "Rock and Roll All Nite." The truncated version of "AC/DC Bag" that concluded the previous evening (in fulfillment of a fan request), was hardly a harbinger of what was to follow.

Phish display patience on "Wilson" that makes the fiery likes of "Reba" all the more of a contrast as its 13-plus minutes unfold. Because the band's collective instincts remain absolutely unerring, the quick transitions, through the James Gang's "Walk Away," two touches on "Tweezer," and "Vibration of Life" form a logic of their own: Phish's playing has rarely soared without interruption as it does on "Mike's Song."

Nevertheless, there's a palpable sense of exultation right from the beginning of the third night's performance too. "Suzy Greenberg," "Buried Alive" and "Punch You in the Eye" demonstrate how pumped the band is on February 20th; playing with a power reminiscent of their best nights including the farewell (sic) tour of 2004.

Bonus discs available through the preorder process for Phish sets like this usually carry their own distinction, and the recording of the band at the Variety Playhouse in Atlanta Georgia is no exception. In something of a contrast to the comprehensive At the Roxy, this single disc is the document of a Phish show unexpectedly cut short: on March 28, 1992, a plumbing malfunction flooded the venue and ended the performance. Fortunately, Bryon Sosinki's audience recording survived and has been treated to the same stellar production (by archivist Kevin Shapiro) and mastering (by Fred Kevorkian) as other live Phish titles.

The exemplary technical expertise matches musicianship just about as breathlessly explosive as the latter two nights of The Roxy run. Phish take flight right away on "Runaway Jim," and barely descend from cruising attitude at all through "Stash," "Rift," "Foam" and two different interpolations of "David Bowie." Comic relief appears in the form of "Secret Language Instructions." But it's worth having this disc for the vocal interplay on "Bouncing Around the Room," which is only slightly less intricate than Jon Fishman's playing on that number.

This combination of intensity and ingenuity is no doubt what Phish fans, and truthfully, any aficionado of contemporary rock, is hoping the band will regain when they resume playing in 2009.