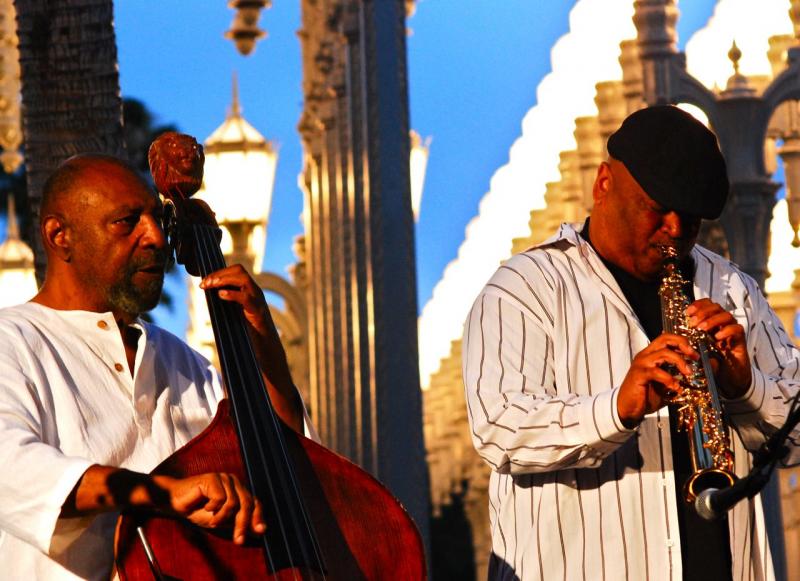 By CHUCK KOTON
November 11, 2010
Sign in to view read count
The Los Angeles jazz scene, in spite of occasional rumors to the contrary, is vibrant and eclectic, though admittedly, also quite far flung. No hoppin' on the "A" train to the Village; out here jazz lovers spin their odometers drivin' from Hollywood to Studio City, from downtown LA to Long Beach, in search of hip and swingin' sounds. And for committed jazz fans, that driving typically pays off in unforgettable performances.
As this past summer imperceptibly turned to fall, the Los Angeles County Museum of Art presented the 19th season of its free Friday jazz series. On August 27th, azure skies and a cool breeze soothed hundreds of enthusiastic people groovin' to the spirit lifting music of Henry Franklin's Quartet. The band grabbed the audience's attention with the solemn intro to the John Coltrane composition, "Lonnie's Lament." Azar Lawrence, whose most welcome return to jazz was inspired by Coltrane's spirit and music, cradled his gleaming tenor sax and ecstatically probed the depths of his soul, while Franklin's bass, Theo Saunders piano and Ramon Banda's drums drove the music to its frenzied climax.
The band continued in the Coltrane spirit with several songs from Franklin's recent recording with this band, O What A Beautiful Morning (SP Records, 2008), beginning with an original composition, "McCoy," that pianist Saunders dedicated to the Master's long time associate, McCoy Tyner. This up-tempo burner had audience feet tapping, hands clapping and voices crying out in joyous approval. Franklin's bass funked up the audience on a Saunders' arrangement that combined James Brown's "I Feel Good" with the Oliver Nelson standard, "Stolen Moments."
Definitely, a crowd pleaser.

The Skipper and the band then stretched out on the Rogers and Hammerstein show tune, "O What A Beautiful Morning," which Franklin executed in the style of Coltrane's "My Favorite Things." The Skipper and his mates transformed this sweetly melodic Broadway standard into a blazing vehicle for unrestrained jazz improvisation, with Lawrence soaring heavenward on soprano sax.

In this era of economic gloom, with unemployment officially measuring 10% and local budgets nationwide being hacked down to unsustainable levels, Angelenos can be grateful that private philanthropy has continued to support LACMA in its vital mission of providing cultural sustenance to the city's residents. On this Friday evening, the healing power of jazz, as administered by Franklin's band, revealed the incalculable value of LACMA's free public musical offerings.

On the first weekend of autumn, as temperatures climbed to 113 degrees in Los Angeles, the Dave Liebman Group threatened to spontaneously combust during their two night gig at Vitello's, a night club in Studio City that, over the last few months, has made a serious commitment to presenting quality jazz in the San Fernando Valley. The prodigiously gifted Liebman, on soprano sax and wood flute, and his long time collaborators, Vic Juris on electric and acoustic guitar, Tony Marino on electric bass and Marko Marcinko on drums and percussion, treated the appreciative audience to a degree of seamless group improvisation that only years of musical interplay can yield.

Inspired by saxophone legend Wayne Shorter's "Night Dreamer," Liebman penned "Dream of Night," an intoxicating musical journey that opened with Juris and Marino weaving in and out with their electronically enhanced lines, like two boxers dancing in the ring. Liebman's soprano sax then takes flight, higher and higher, conjuring a condor riding an updraft, as he builds the musical tension to its inevitable release. The band took Dizzy Gillespie's be bop standard, "A Night In Tunisia," in an unexpected direction, transforming the swingin' Latin beat to a lazy, molten, morphine crawl. On "Riz' Blues," an original composition from a recent recording, Blues All Ways (OmniTone, 2007), Liebman's soprano continued the dream walkin,' and along with Marcinko's shimmering cymbals and rattling castanets, splashed indigo hues with their musical palettes. 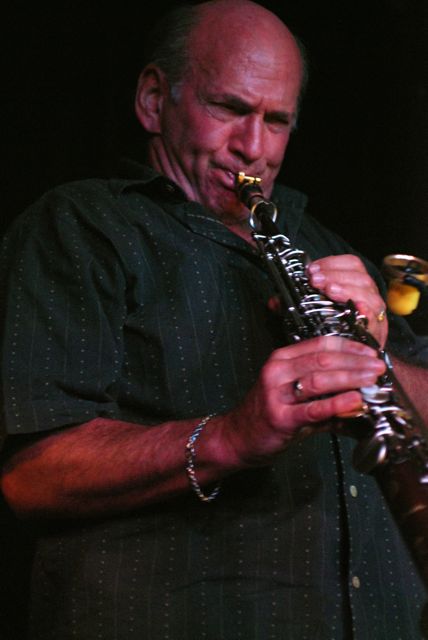 The band's interpretation of the Ornette Coleman classic, "Lonely Woman," from Liebman's latest CD, Turnaround: The Music of Ornette Coleman, revealed the great depth of this artist's creativity. Recently voted best recording in Germany, Liebman, who joked that the cd would be "released in the US by around 2020," takes inspiration from Coleman's haunting melody while avoiding slavish imitation. Juris led off, his guitar solo a weightless, sonic exploration of a lunar landscape. Spacey sounds, indeed. Liebman then exchanged his soprano for a simple wood flute, magically morphed into a Hopi deity, the flute playing Kokopelli, and carried the audience far away to the muted pinks and blues of a desolate, southwestern desert sunrise.

The Dave Liebman Group's four sets at Vitello's epitomized all that is great in jazz. These eminently talented, creative spirits combined free improvisations with a shared sensitivity to each other's musical inclinations, just as champion caliber basketball players harness their individuality to the unity and success of the team.

Another highlight of the autumn jazz scene in the Southland is the Angel City Jazz Festival. Now in its third year, the fruit of Rocco Somazzi's tireless efforts has become the premier event for the presentation of avant-garde music here in Los Angeles. Unlike last year's two day marathon at the John Ford Theater, this year the festival's performances took place at several venues over a week-long period. Angel City's opening night concerts, held at the REDCAT theater in Disney Hall on Oct. 2nd, featured the multi-talented pianist, composer and arranger John Beasley and vocalist extraordinaire, Dwight Trible.

The duo began with Beasley's cascading notes falling on the full house like a gentle mist, while Trible's cantorial, wordless vocalizations seemed to express the entire spectrum of human emotion from joy to sorrow. Their dramatic interpretation of the Billie Holiday classic, "Strange Fruit," conveyed all of the pain Lady Day and the African American community suffered in the Jim Crow South. Accompanied by Beasley's serious piano skills, Trible's scatting on the standard, "Autumn Leaves," suggested an ecstatic, religious experience in a holy roller congregation. The set's highlight came with the performance of Nina Simone's "Backlash Blues," a song that gave Trible and Beasley, as well as the audience, a cathartic opportunity for the release of all pent up emotions. Their musical homage to one of the world's great artists surely had Ms. Simone smiling down on us all.

The evening concluded with an unforgettable set by Henry Grimes and Friends. The boundary breaking bassist, violinist and poet, for too long lost and forgotten, returned triumphantly to the city where, over forty years ago, after a series of misfortunes, he mysteriously disappeared. The music began with a cacophonous symphony that could have been titled "New York's Tower of Babel." Grimes' deeply sonorous, insistent bass clashed with Alex Cline's crashing cymbals like two cab drivers disputing the cause of their collision. Reedist Vinny Golia, alternating between soprano, tenor and bass clarinet, raced up and down the keys like an ambulance weaving its way to the scene of the accident, while, above it all, Wadada Leo Smith's trumpet evoked a police siren howling through the city streets. On another unidentified piece, Grimes changed up the pace and, bow in hand, coaxed dirge-like, mournful tones from his bass, as Smith, this time with muted trumpet, evoked his own plaintive cries. An appreciative and attentive audience offered up a standing ovation to the musicians for their inspired, if at times, challenging set.