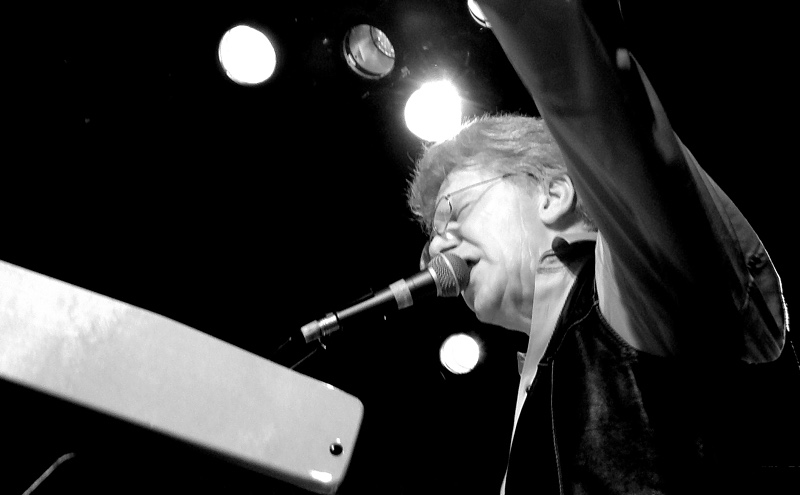 The Sonics virtually created the garage band sound, back in the mid-1960s, taking the foundations of rhythm'n'blues and forcing a leap towards further extremity, continuing the mission begun by Link Wray, but using warped pop song structures instead of instrumental grinding. Surely this Tacoma gang's influence subsequently hung down into the eager mouths of The Velvet Underground, The Stooges, The Modern Lovers, The Cramps, The Fall, The Gun Club and Jon Spencer's Blues Explosion, to name just a few likely (or even confirmed) acolytes. The Sonics were dispersed for decades, but have been strongly re-united since 2007, finally releasing an album of new material in 2015, lovingly mono in nature. This platter was heavily featured during their set in The Institute's middle-sized room, The Library, which they managed to fill quite tightly. This was presumably the combo's first visit to Birmingham in their 45-year existence.

Fortunately, the surviving members make up the personality-loaded front line of keyboards, saxophone and guitar, with most of the lead vocals taken by (plastic) ivory-tinkler Gerry Roslie. Sadly, his organ and piano sounds were often buried in the mix, and the saxophone didn't fare much better, although the vocals were loud and clear. No problems with the drums, bass and lead guitar, though. This was effective as a wall-of-sound, but there were times where some highlighted organ-gushing would have upped the general crazed quotient. Tenor man Rob Lind's harmonica solos on a few of the numbers were adequately boosted, adding a burning extra to the already stoking array of constantly-soloing front-line activity. Bassman Freddie Dennis (a former Kingsman) ably displayed his high-holler vocals on several songs, but Roslie's voice was also still in shape for similarly extreme screams, always in tune, despite their raucous attack.

The classics ran rampant, with "Boss Hoss" being a less-acknowledged gem, and "Psycho" charging forth soon after. Stand-outs from the new album were "Be A Woman," "Bad Betty" and the best of all, "I Got Your Number" (which happens to be 666!). Notable covers were "Have Love, Will Travel," "Louie, Louie" and "Keep A-Knockin.'" After nearly an hour, the set finished surprisingly early, but there had to be an encore, so a pair of their crucial numbers could be unchained, to demonstrate what must have been a particularly extreme stance back in 1964 and '65. "Strychnine" and "The Witch" are still amongst the greatest rock'n'roll songs ever written, and The Sonics delivered them with a mean gusto. This gig didn't match the excessive wipe-out of their 2007 show at Warsaw in Brooklyn, but the house was still ultra-heated by their devilish commitment to sheer, stompin' chaos, sculpted with finger-wounding edges.

Otis Gibbs is a stitcher of tales, although some of these might qualify as tall. This troubadour from Indianapolis suburb Wanamaker returned to Birmingham suburb Kings Heath after a two year gap, to serenade an intimate gathering that had nevertheless necessitated the arrangement of a few extra chairs to accommodate a late rush of walk-in punters. Gibbs shares a similar aura to that of Brett Sparks of The Handsome Family: dry, perverse, rasp-voiced, bushy-bearded and brandishing an acoustic guitar. Under his floppy hat, and behind his spectacles and facial hedge, Gibbs might possibly be an alternative country singer, but there's just as much folk-blues, gospel and sheer ornery acoustic outsider rock balladry. He spins tragi-comic yarns that prompt blended responses, with most of the weight being taken by his voice, whether sung, intoned or simply talking, all of which possess varying degrees of musicality.

An American ex-tree planter on an extended tour, he's one of those visitors who is keen to delve deep into his traversed culture, making pointed observations about English existence, and checking out whether these are translatable to his homeland ways. He stayed in a good hotel for once, he quips, and the towels were so fluffed and thick that he could barely close his suitcase. A deep rasp delivers cutting humour and the Gibbs lines are so full of substance that it's a challenge to grasp their meaning and consequences whilst simultaneously treating them as a song. His ditties demand a few more airings, so it's almost advised that any potential audience prime themselves before the gig. It's preferable to have a surplus when absorbing, rather than the insufficient matter common to many singer-songwriters. "Caroline" wove a particularly vivid tale of a kind of romanticised abuse, and "The Darker Side Of Me" narrated another deeply-etched story. The Gibbs guitar style is quite basic, with most of the action happening on the vocal front, but this doesn't mean that he avoids inserting unexpected string-figures at strategic moments, little atonal runs that leap out when the listener might be getting complacent.

For years, the veteran reedsman George Huxley presented his monthly club night at Silhillians in Knowle, but the session has recently relocated to the Solihull British Legion, which is already a well-established home for the local traditional jazz club. Huxley alternates between soprano and (white plastic) alto saxophones, but favoured the clarinet during this crowded pair of Thursday evening sets. As a youth, it's certain that the bulk of his vinyl collection was taken up with Sidney Bechet platters, an influence that remains dominant. Huxley's soprano tone captures the essence of that distinctive Bechet vibrato, and his lively negotiations just seem to get better each time he's witnessed at a gig, naysaying any expectations of greater age dwindling the powers.

"Fidgety Feet" set the pace, which was frequently dashing. An invitation was made to dance, but the floor remained curiously empty for most of the evening. Perhaps the Huxley tempo was a touch too accelerated, and his repertoire sometimes turning away from familiar chestnuts, picking out some lesser-aired delicacies, such as Kid Ory's (and Louis Armstrong's) "Savoy Blues." John Penn's piano had a lively ragtime-y jangle, a kind of pert dancing across the keys. "Passport To Paradise" was delivered as a duo with Huxley and Penn, then "Eccentric," as laid down by Muggsy Spanier, featured a flighty clarinet solo, buoyed by the riffing trots of trumpeter Gordon Whitworth and trombonist Ron Hills. The varied arrangements kept on coming, with Whitworth fronting a quartet for his vocal version of "I Can't Get Started." Towards the end of the second set, Penn played a completely solo "Chevy Chase," an old Eubie Blake number, chased up by "Coal Black Shine," with Huxley paradoxically bright and shiny on soprano horn.

Saxophonist John Altman is not so well-known on the jazz scene. His work is usually as a sideman, an arranger, or sometimes composer, with much of his work inhabiting the soundtrack or advertising spheres. One glance at his credits will reveal a Zelig-like presence, standing just to the side, or lurking behind a whole host of famed artists. He's contributed, in his various guises, to the careers of Van Morrison, Eric Clapton, Amy Winehouse, The Rutles and thence the Monty Python gang, just to name a handful of his massed credits. He's a 65-year-old with a boyish demeanour, shiny-domed and, for this gig, favouring the soprano saxophone, possibly so it will fit inside his hand baggage-sized, wheeled suitcase, which remains at his side wherever he roams, even onstage. The last artist that your scribe witnessed displaying such an attachment was Lee 'Scratch' Perry. Altman has the look of Lol Coxhill, including a similarly dry and wily sense of humour.

The chosen venue for this gig is also easy to miss, hidden away in the grounds of Birmingham's King Edward's School, and rarely presenting acts that impinge on the outside musical world. It's a relatively new joint, and proof that there are always undiscovered scenes lurking where least expected. Altman fronted a quartet, with bassist Andy Cleyndert being the most familiar presence from the jazz firmament. Mitch Dalton (guitar) and Pete Cater (drums) completed the line-up.

The first set trawled through a selection of originals and arrangements of non-obvious tunes, whilst the second opened up to a jam session vibration with members of The People's Orchestra, a local community collective who were hosting the event. This latter half was much looser, utilising numbers such as "C-Jam Blues" and "Take The A Train" as vehicles for extended blowing and dialogues between the soloists. Altman's soprano lines were precise, cutting and labyrinthine, his experience outside the jazz world adding stylistic shapes that tended to make him stand slightly outside the music, looking inside from a variegated perspective. The repertoire was at once mainstream and off-kilter, mostly in the choice of material and delivery. Altman has a yen for samba perversions, each set closing with bobbing transmogrifications of Eric Idle's "Always Look On The Bright Side Of Life" and the theme tune to the old I Love Lucy television show. These were unpredictable highlights of the evening, genuinely subverting musical expectations, and providing the assembled with a jaunty step as they filed out of the theatre.