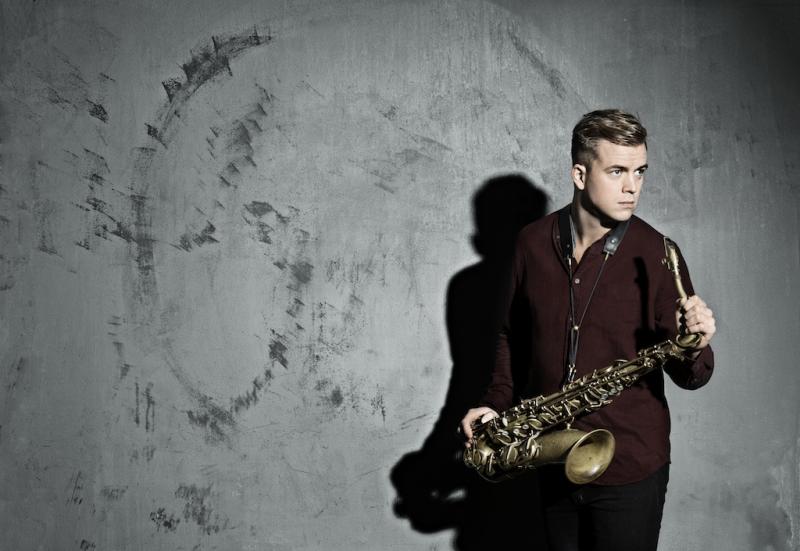 Not an artist who's interested in stasis, the Norwegian saxophonist Marius Neset spent most of two sets unveiling pieces from his new Pinball album, which was released at the beginning of 2015. It's his fourth recording, and Neset seems set on making this a pleasingly prolific annual event. The album features Jim Hart (vibraphone/marimba) and Petter Eldh (bass), but they were also joined for this gig by a pair of replacement touring band members, Magnus Hjorth (piano) and Joshua Blackmore (drums). Even so, this was immediately remarkable as an outfit that already knows the material intimately, embarking on a journey of exploration and interpretation, driven hard (but positively) by their leader.

Neset might not be a writer of memorable or diverse tunes, and he might not be too interested in dynamic extremes of light and shade, but this doesn't matter so much when his succession of astounding improvisations hurtle along, bending theme into elaboration, weaving in and out of the structure, to the extent that the solo becomes the melody, and such relationships are often inextricable. His bandmates supported this flow with their own linear inventions, and this monomania was consistently compelling for the two hours or so of action. The pairing of Hjorth and Hart allowed an abundance of shared sonic terrain to be probed, with the latter shifting regularly from metal to wood, adding yet another element.

Neset was wired up for the duration, moving from tenor to soprano, usually with speedy changeovers and precise goals. He's continuing the funky-flecked soulfulness legacy of Michael Brecker, constructing elaborate phrases which ascend through predictable levels of development, reaching for their inevitable climax. The excitement lay in guessing how high this could possibly reach. Even if the pathway could be discerned in advance, this didn't remove any of the dramatic tension. Neset decorated his statements with fingerings that often worked against his breath, creating curt attacks and decays of a note-run. There were only a few slower, quieter numbers. A funkier thrust has strengthened in his new compositions, and the repeats of minimalism are present, not least with some outbreaks of complex group clapping that suggested an immersion in the soundworld of Steve Reich.

Another Saturday nite, another uncompromisingly alternative evening at The Tin, Coventry's ever-imaginative den, nestled in the Canal Basin, situated just outside the city's ring- road. It's part of a regular gig-series called Lady Godiva's Operation, pulling together references to The Velvet Underground's 1968 toon and Coventry's own historical naked noble. These sessions are assembled by drummer Alex Neilson, who also opened the proceedings with his own Death Shanties, a Glasgow duo grouping with saxophonist Sybren Renema.

Setting up in all-acoustic mode, in front of the actual stage, this pair were actually louder than most amplified combos, mostly set to 11 on the throttle-dial. It was more of a throttling of throats than an engine-rev. The dominant character was violent free jazz, with Renema most frightening on his baritone horn, but still highly worrying on alto. Cheeks puffed to Dizzy extent, he circular- gulped vast stores of air to fuel ragged blasts of abstract gristle- gobbets. Neilson was more varied, storming with full volume-power, but also balancing multiple accents and tones as he danced around his skins. Renema anticipated a changeover from alto to baritone, kneeling with his bigger horn balanced on the floor, at the ready, teasing the gathering as he telegraphed a swift re-planting of his lips. It looked for a moment like he was going to blow both at once, Roland Kirk- style. Neilson called out a high vocal moan, almost embracing that of the saxophone, before inserting a small plastic birdcall pipe, chirping for a space, drooling, then hurling it at the front table- rows. Death Shanties played for 35 minutes, and cleared the air to maximum extent. After the set, your scribe overheard Renema telling a couple of punters how he wraps his baritone in his underwear, then shoves it in his rucksack for the journey home, and could he leave it lying on the table next to theirs, until gig's end.

Vibracathedral Orchestra are heading towards their 20th anniversary, a Leeds collective with their minds set on the heart of the shamanic drone. In this case, they were a quintet, with guitars being the most popular instrument, although multi-instrumentalism was looming, with additional attention given to percussion, electronics, vocal effects and the odd appearance of violin. The identities of the players are difficult to nail down, but founder kingpin Michael Flower was to the rear, mostly thrumming laid-flat strings or conventional guitar. Neil Campbell was also present, the only player without a guitar, rummaging around with his collection of wiry electronics boxes, rattling goblet drum and throwing stadium rock poses whilst strafing his violin to ear-chafing ends. As perhaps expected, their extended piece unfolded with layers of steady texture, ritualistically inclined, and building to a resounding peak around halfway, as the frontal multi-instrumentalist picked up his guitar and started to shape a purposeful riff which imparted a transfixing momentum. This was the point where the other players were simultaneously fuelled, and the inherent factors connected. Suddenly, all the energies were released.

As their name suggests, the Apex boys have a broader repertoire than most old school jazz bands, emphasising the swingin' side of the street. The Solihull Trad Club has been relishing a wider musical range of late, providing variety for its appreciative regulars. The Apexers were clad in black shirts and trousers, their sparky banter as bright as their matching white ties. Plenty of laffs were prompted both on the stage and in the audience, as the players teased each other mercilessly. The two sets were peppered with more than the regular amount of songs, with vocal duties being shared out across the front line. Trombonist Ron Hills was the straight man, while trumpeter John Stone and reedsman Robin Mason jousted with each other along the borders of absurdity.

The horns have a tight and robust sound, suggesting a much larger band when they're jolting through the swing numbers in their book. The presence of Pete Robinson's fluid electric guitar lent another refreshing aspect, dominant right from the opening "It Don't Mean A Thing (If It Ain't Got That Swing)." He also made "Jersey Bounce" that little bit lighter-footed. Bassist Roger Heath was guesting, an august personage on the trad scene, providing a steady, nimble-fingered foundation with his extra fifth string. "Rose Room" featured a standout clarinet solo, with Mason in Benny Goodman mode, switching to alto saxophone for "Don't Get Around Much Any More," taking the vocal himself. Then, Gershwin's "I've Got A Crush On You" opened with just Stone's vocal and Robinson's guitar. For the Kenny Ball hit "So Do I," Stone donned a plastic military helmet and delivered the first verse in German, referring back to the original 1930s era of "Bel Ami," the song's original title. He found another colour on the cultural spectrum by adopting calypso patois for a ganja-streaked shimmying ditty. There were a few strategically placed feature spots with the line-up cut to a quartet, allowing a single horn to carry the tune, "Petite Fleur" for Mason and "The Touch Of Your Lips" for Hills. Nearing the end of their dancer- prompting afternoon session, the Apexers dropped in a dandy version of "Hit That Jive, Jack," a welcome tip of the beret to Slim Gaillard and Nat King Cole, complete with an oleaginous tenor solo. This was chased by the equally fine "Truckin,'" which rolled along with another hot Mason solo. 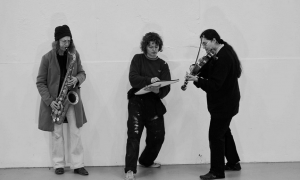