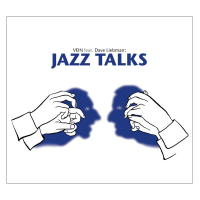 This collection documents the first studio recording of Swiss trio VEIN with American saxophonist Dave Liebman over a single afternoon in Basel. VEIN had approached Liebman, perhaps best known for his Saxophone Summit recordings with Joe Lovano and Ravi Coltrane, as far back as 2009 seeing in him a like minded spirit perfectly at ease with either the jazz tradition or something more expansive. While this special quartet had played live together before, documented on the live album Lemuria, this recording was made without rehearsal showcasing an unusual level of understanding between the players.

The quartet's links to more traditional jazz are shown by the four standards tackled on the album. Of these, probably album closer "You and the Night and the Music" is as close to the more linear solo pattern of straight ahead jazz as things get, Liebman's solo at the close of the piece being superb. "Autumn Leaves" is more typical of the approach, sounding as if it starts with the solos and distinguished by the space left by the players or each other allowing an excellent bass solo by Thomas Lahns to emerge.

Personal favourite "Stories of a Century" takes that rhythmic impulse and stretches it into something more reminiscent of the M-Base sound, built around Michael Arbenz exuberantly physical piano theme. The track serves as a reminder that VEIN have also played with Greg Osby at London's Vortex in 2014 and are equally adept at this style of jazz. Another highlight is the gentle contrast of Michael Arbenz composition "Black Tortoise" where Liebman leads the collective into the piece before Michael Arbenz again distinguishes himself with a measured gently paced solo that carries the piece forward admirably.

Not everything on the collection works as well -at a playing time of around an hour the album could trim 20 minutes without diminishing its impact. Its been a problem across the music industry for some time—artists want to give listeners good value, and fill up the playing time of the CD with pieces that, while not without merit, do not measure up to the best in the collection. The net effect is to dilute the overall quality, spreading the most memorable tracks more widely. In this case the suspicion is that the intention was to archive an enjoyable session with a great player guesting. The truly dreadful CD cover doesn't help dispel this, looking more like clip art or the cover of some budget software than the sort of artwork that would intrigue and entice a potential purchaser to investigate. While the endless, pointless, debate about the relative merits of different formats has become especially tiresome of late, it has to be said that the limitations of a 45 minute LP, not to mention the larger cover, would have forced a better album from the raw materials showcased here.

That said, it would be a shame if these flaws were to obscure the quality of the best of this collection. For the most part VEIN have served up something enjoyable and forward looking with the occasional jump into the unexpected to keep the listener on their toes. The overall quality and inventiveness of the playing by what is clearly an excellent band might have produced something more coherent for the home listener, but there can be no doubt that live this would be fantastic. It is a difficult call for the improviser to make -stay in the moment and release something looser that documents the session, or go the Miles Davis/Ted Macero route and edit the recording significantly for CD release. VEIN have taken the former route, but with a little careful playlisting the listener can still approach the latter. Recommended.

All the Things You Are; Negative Space; Small Talk 1; Stories of a Century; Black Tortoise; Jammin'in the Children's Corner; Small Talk 2; Autumn Leaves; Clear Light; Waking With a Start; Small Talk 3; April in Paris; You and the Night and the Music.