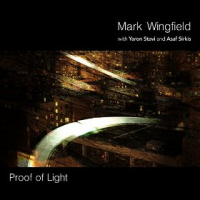 My initial exposure to UK-based guitarist, educator Mark Wingfield occurred via a recommendation to check out Three Windows (Dark Horse Records, 2008), which is an album that demonstrates his astounding virtuosity and unique voice, spanning jazz, fusion and a host of melodious ambient treatments. Many artists and technicians within the perceivable inner circle recognize Wingfield as a force to be reckoned with. Yet with Proof of Light produced by progressive New York City-based Moonjune Records, he should reap the benefits of additional and warranted exposure. Supported by prestigious musicians, drummer Asaf Sirkis (John Abercrombie, Jeff Berlin) and bassist Yaron Stavi (David Gilmour, Robert Wyatt), the leader often constructs flourishing and power-packed thematic overtures, as they seamlessly fuse agility and power into the grand schema.

Akin to guitar heroes, Jeff Beck and Jimi Hendrix, Wingfield makes his guitar howl, sing, and cry for mercy amid flickering single note runs, tinted with a dash of reverb that adds depth to these works. Sans a horde of up-tempo supersonic burnouts, Wingfield takes his time in the thematic development department. However, on "Voltaic" the rhythm section's thrusting pulse sets the paradigm for the guitarist's rather ominous delivery, intermingled with ethereal tonal splashes and wailing licks. Here, the trio ups the ante so to speak, as they execute thoroughly complex, brisk and snappy unison lines with effortless ease.

Sirkis and Stavi stretch out during various bridge sections, complementing a host of swaggering grooves, reverse engineering processes, and turbulent breakouts where the leader busts everything wide open. But "Koromo's Tale," opens with Stavi's nimble lines, dappled with background effects and the drummer's textural cymbals patterns for a piece that is quietly soaring by design, casting an ECM Records-type aesthetic partly due to the leader's tone-twisting notes. Hence, from a holistic perspective, Wingfield possesses the goods to be a world-beater. He's an idiosyncratic stylist who infuses wistful delights into his mode of attack, while sparking vivid notions that the guitar is an extension of his soul.