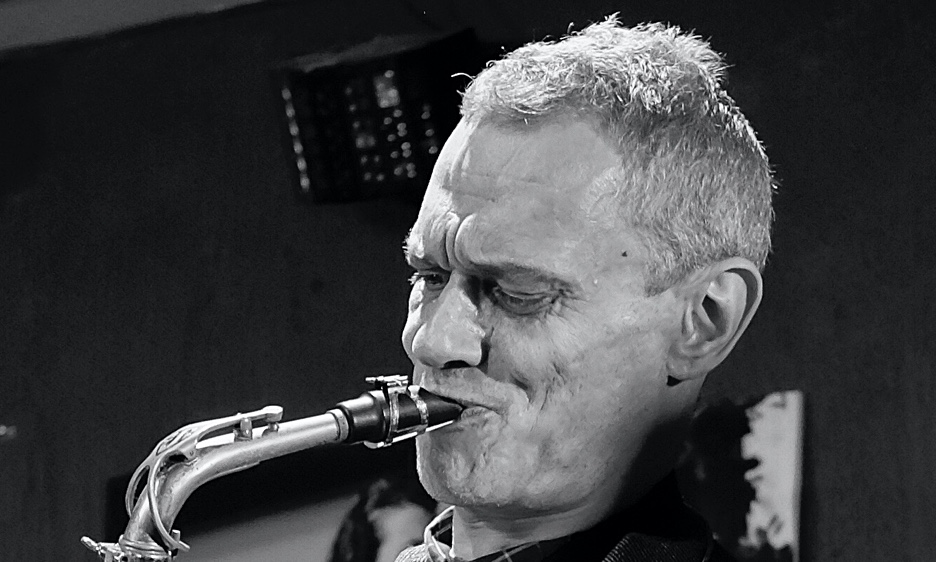 Birmingham alto saxophonist Chris Bowden operates a monthly gig at The Blue Piano pub, just outside the city centre. He always invites guest players, and this time it was local trombonist Andy Derrick. Bowden is one of the best players in the UK, but this gig is always quite a relaxed, standards-orientated setting. The band also included Joe Ruddick on keyboards, topped off with bass and drums.

The quintet opened with the mellow coaster of "Tangerine," from way back in 1941, and penned by Johnny Mercer and Victor Scherzinger. Then Bowden switched to tenor saxophone for J.J. Johnson's "Lament," surely selected by 'boneman Derrick. Lately, Bowden has been showing off on this second horn, broadening his range, the solo here flowing easily, but broken up with sudden spurts or thoughtful pauses, with a softly thistly edge to his tone. It was gratifying to catch a combo co-fronted by a trombonist, as Derrick's own solo was extensive, winding out a substantial storyline. He then offered "Weaver Of Dreams," as tackled by Bob Brookmeyer, a silken ballad, even if its stride was brisk.

The second set was funkier, with Bowden operating his David Sanborn squeal, and Derrick getting down in the Crescent City. They jumped through "Chill" (Joshua Redman) and "Voyage," the Kenny Barron tune in its Stan Getz incarnation, the swift and sassy horns trading brief solos, as they veered into "Take The 'A' Train" and closed out with Carla Bley's "Setting Calvin's Waltz." Besides the mercurial playing, these two sets also benefited from a very well-chosen and less-than-obvious song selection.

Having witnessed this act twice, it seems part of the deal is that they become uppity with the process of performing, mainman Domingae Garcia-Huidobro getting sulky with the surrounding circumstances. This diva showmanship happened at the Green Man festival in 2018, when he kicked over his amplifier, and to a lesser extent here in Birmingham. Föllakzoid hail from Santiago in Chile, and their music is plunged into minimalism and repetition, the album I (on the Sacred Bones label) devoted to a suite-like four-parter which builds and builds, heavily effected guitar matched with relentless, suffocating beats. It's a combination of rock, electronica, drone and house techniques, extreme in its manifestation of these forms. The actual methods are relatively simple, with the entertainment passing just as much through a conduit of perverse showmanship, courtesy of the completely wasted look of Garcia-Huidobro, who made repeated pleas for the lights to be cut, to assist complete Gothic immersion. Despite this description possibly reading as a negative assessment, Föllakzoid make for magnetic viewing, revealing a hard, pumping sonic obsession. It's a single-minded concept, and for now it's successful, but they might need to widen the range in coming years.

Yellowman is a revelation, if you haven't seen him play before. The stage at The Jam House is very accessible, low and with no barriers, the audience pushed close, already creating an intimate vibration. The Jamaican singer leapt onstage, wired for action in whippet cyborg mode, clad in nylon sporting spray-ons, unceasingly jogging and skipping as he tumbled nimble, verbose couplets, sometimes singing, other times toasting. He ranged through a lot of songs, most of them very brief, with little pause, and no lessening of taut energy. The crowd danced, sang along and generally relaxed into the ideal spirit, as Yellowman dropped in a few surprises on the way, not least the Fats Domino-popularised "Blueberry Hill" (which he covered in 1987) and John Denver's "Take Me Home, Country Roads." Yes indeedy!

We can sometimes discern similarities between Irish and Chinese folk musics (as explored by The Chieftains), so why shouldn't the Senegalese kora player Seckou Keita guest with accordionist Sharon Shannon, to show how naturally their rapport has developed? He's already enjoyed a substantial collaboration with the Welsh harpist Catrin Finch.

Arriving a touch tardily, your scribe still managed to catch over an hour of music. The second set must have only just begun, and this was where Keita came on as a well-grafted part of the band. Shannon tends to prefer a speedy chase, with most of the clustered numbers involved a full-on rush of dancing notes. The pair set up an energetic cross-current of racing solos, driven by acoustic and electric guitars, fiddle leaping across their shoulders. Shannon just can't avoid climaxing every single set of her life with the steadily accelerating "Music For A Found Harmonium," by the Penguin Café Orchestra. This is a wise ploy, in its never-ending, constantly reprising encore incarnation.