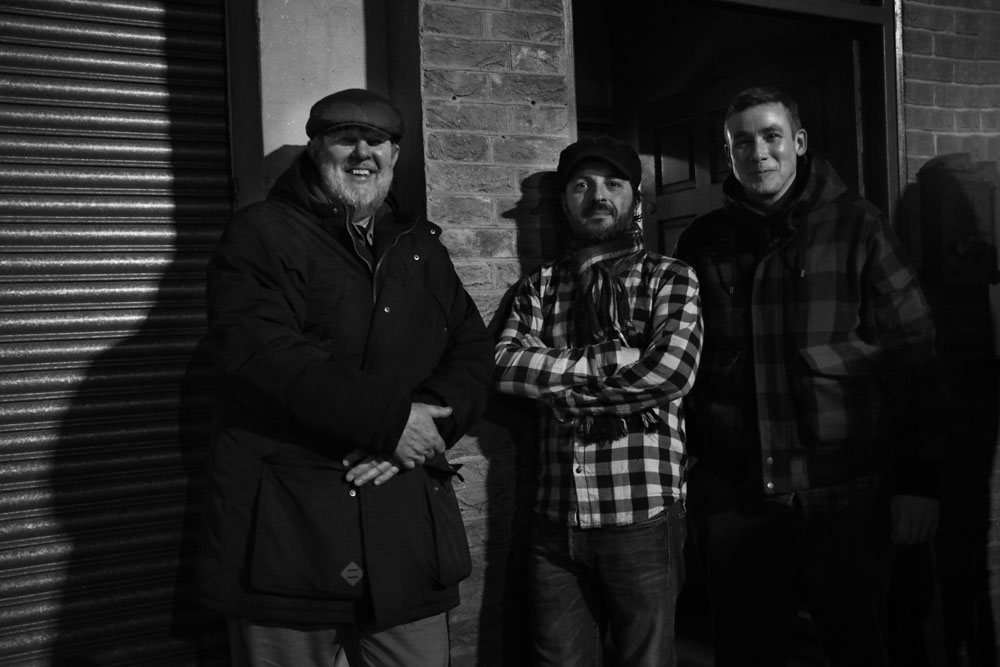 The fortnightly (apart from during the low seasons) Fizzle improvised music session takes place on Tuesdays in the rear room of The Lamp Tavern, a back street public house in the old industrial hinterland of Digbeth. Much of this Birmingham quarter has steadily been artistically colonised during the last two decades, but this Lamp joint is even on the edge such creative gentrification, although it did, for a goodly time, house the crafty Rock'n'Roll vegan brewery on its roof. Every so often, the Lamp-lord pokes his head around the corner to pronounce his level of disappointment with this necessarily abstract music-making 'racket.' Meanwhile, the Fizzlers have been awarded funding by the Arts Council Of England. This has assisted in the expansion of their programme, not least with the increase of artists from further afield, sometimes even mainland Europe or north America. Some of their gigs now take place at the mac, a few miles out of the city's centre, in its intimately tiered Hexagon Theatre, with outfits such as Amok Amor and Big Satan (featuring Peter Evans and Tim Berne, respectively).

Usually, the Lamp evenings take the shape of a 'main' act, preceded by a 'lesser-known' teaming, but often such set-ups can take on the feel of a double bill. Saxophonist Bruce Coates is a central figure on the Birmingham improvising scene, having operated his own long-running sessions, Frimp, at various boozer venues. He opened with an unusually arrayed grouping, partnered by the doubled electric guitars of Ian Simpson and John Jasnoch. This became a kind of fantasy late-period Spontaneous Music Ensemble, inhabiting a rarefied sonic peak, with Coates choosing soprano, the three players entangled in a tight knit, without much space or pause. Eventually, a stringy time-elasticity was chewed out, the implied rhythm dragged and then released.

Coates went further afield during their second piece, aiming for open vistas on sopranino, but with flooding guitar sweeps, rising up before being clipped back, like a conflict-ravaged border hedge. Taking things even higher, Coates unveiled a likely homemade instrument that looked like an altered penny whistle, issuing a thin, reedy warble, as it found a new life as a micro-saxophone. Returning to the soprano, as the guitars sent out a ghostly Santo & Johnny shimmer, Coates made percussive stutters, and the set closed up with hammered strings and bleeding guitar sustain. All of this was very concise, a short-ish set with a varied sequence of moods, textures and dynamics, highly controlled by each player.

As the years roll by, saxophonist Alan Wilkinson is now a veritable veteran on the scene, his principle influence being as a member of the Hession Wilkinson Fell trio, one of the UK's mightiest improvising groups. Here, down from Leeds, he reined in to a twosome set-up, but as his partner was the full-on drummer Andrew Cheetham (abstraction with rock power), and Wilkinson himself mostly bullroared on baritone, the audience (and their ears) may well have been relieved that there weren't any more members of this already mighty gang.

The baritone began with a primordial lowness, a shaggy-bear warning sign, as Cheetham made a hard clatter on taut skins, cymbals sibilant. Wilkinson vocalised simultaneously, screaming, snotting and gristling deep into his tubes, as a brief rhythmic repeat caught hold, soon breaking apart into a light percussion and sparse saxophone scatter. Wilkinson was having a slight rest on alto, but only relatively speaking. Another onslaught ended with an abrupt, extreme high note, and the pair's third number found the bass clarinet out of its case, Cheetham sounding at his best using brushes to flick and fleck around his kit. When Wilkinson couldn't resist hauling up his baritone again, we sensed that the finale had arrived, with what was almost a traditionally climactic fanfare. This duo enjoyed the muscle flexing aspects of improvisation, and this was fine amongst the enthralled gathering, with a bonus of stealth-rhythms, breather quietude interludes and a parting shot of almost old-school Tubby Hayes jazz, albeit heavily roughed up by 1950s clubland gangsters.

Blues and ragtime were found in their 1920s and '30s acoustic purity at this sparsely attended gig, an unusual state for this popular roots music café in Birmingham's Kings Heath suburb. Perhaps ultra-vintage blues is only for a select few obsessives here, but it was also a quiet Wednesday night. Those of us who were in attendance were almost universally steeped in this music, although some exuded an aura of near evangelical depth of purist detail. Perhaps that's preferable to heading in the other direction, towards rock-blues bombast.

Acoustic (of course) guitarist Ari Eisinger was making a short tour, over from Philadelphia, his approach clearly divided almost equally with a workshopping sensibility. This facilitated a pleasing surfeit of historical morsels, but had the disadvantage of spreading an overly scholarly and self-conscious atmosphere. This might have been fine, apart from this being Eisinger's unlucky night for snarl-ups, as he wrestled with an instrument that appeared uneasy about being tuned. It's difficult to ascertain how pernickety Eisinger was, especially as the micro-perfectionism seemed to be his alone, and sustained for the duration of virtually the entire gig. We must assume that surely he can't be in this state for every performance. There is a golden rule to stagecraft: if there's a fuck-up, it's ultimately better to go on with the show rather than completely derail the proceedings with perpetual uncertainty, even though Eisinger described his tuning results as 'serious awfulness.' Some acts deal with misfortune extremely well, but others just stand or sit still, looking embarrassed and forlorn.

The tunes that Eisinger played were very well selected, and he would have been wise to forgo 'perfection' for general spirited momentum. "Bad Feeling Blues" indeed! Lonnie Johnson and Blind Blake numbers displayed a deft touch, the latter's "Southern Rag" a marvellously intricate instrumental. Eisinger frequently fielded the audience for requests, and could have used a slightly more engraved set-list, as this was another factor interrupting the proceedings. Then his plectrum broke, and his pockets were too deep, and the evening really wasn't going well! He left the 12-string beast until the encore, but thankfully had no problems with that particular axe. If we just concentrated on the tunes, the songs, the fingering, and the feel, this would have read as a highly enjoyable two-setter, but unfortunately, the constant technical derailments were something of a coitus interruptus, to put it mildly.

Back to Digbeth, and one of its arts venues, The Edge being primarily a gallery-cum-studio that holds occasional parties. This was a post-witching hour Saturday session, a time always favoured by Birmingham's long-running Bongo Go promoters, who are dedicated to Afro-Latin-Caribbean musics, mostly as vinyl-spinners, but also with a significant track record in booking live acts. Their guiding force, Brian Parsons (otherwise known as DJ Zuppa Inglese) died prematurely in 2014, but cohort Glyn Phillips (El Hombre Elastico) has continued to hold the turntables aloft during the last three years. He also holds the timbales high for Manos Pa'arriba, a local band that has the singular talent of flavouring their Colombian cumbia core with strong traces of Balkan wedding music.

Elastico maintained the partying rush all night long, opening with some slightly softer dj-ing sounds, then skipping into some up-tempo classics, before taking the stage as part of Manos Pa'Arriba. The rest of the line-up featured lead singer ElliNoire Midhani, Katie Stevens (reeds), Dave Adams (accordion), Dan Hayward (electric bass), Glyn Phillips and Mark Magoo Robertson (percussions). As their name instructs, in Spanish, the sextet spend mucho time with their hands in the air, exhorting the crowd to do the same, but they also find time to rehearse heavily, or so it sounds. Later, it was learned that they'd hardly brushed up their playing at all before the gig, but possess a natural rapport that's evolved over their years together. Ultimately, the band marry sheer tight professionalism with a spontaneous-seeming devotion to revelry, very together technically, and also in terms of general camaraderie.

The words of songs sung in Spanish and Romanian sound very convincing and natural, bubbling up a strange ethnic brew, with hints of unknown ingredients, and unclear blending ratios. They also prompted much action on the dancefloor. For those not moving too flashily, there were also substantial solos on the clarinet and timbales, with Elastico being the hardest working Hombre in showbiz, jumping back onto the turntables straight after show's end, keeping it low at first, then gliding through clusters of soukous, Afrobeat and ultimately into some more funtime-novelty inclined tunes. Even though Bongo Go only convenes twice a year now, that makes their events completely compulsory for attendance. They should perhaps consider a more reclined monthly, or even weekly, dj session, to maintain the motion all year around in 2018.

The next Fizzle session invited another British improvising great, Paul Dunmall, who was joined by fellow saxophonist Frank Paul Schubert (on tour from his Berlin home), plus bassman Sebastiano Dessanay (an Italian living in Birmingham) and local drummer Jim Bashford. Dunmall started on tenor, Schubert on alto, their duo entrance later expanded into a quartet, as the German wound around in barking, rugged form, followed by Dunmall's own spotlight rush, bleating with multiphonics, alternated with a warm roundedness. Bashford made tough puffball hits, as the horns danced, weaving lines between each other, pulling up for a bass solo. The drums re-entered, and Dunmall picked up his alto, Bashford switching to fleshly palms. The twinned altos rattled faster, then honked with gaps, as Dessanay produced a rich bowed bass solo, finely toned. Bashford slid his brushes softly, and a Schubert theme developed on his tenor.

The second set found the two saxophonists choosing sopranos, whilst Dessanay bowed percussively and Bashford scampered lightly with his near-weightless reed-sticks. With the unerring instincts of the well-weathered improviser, the horners simultaneously began to chatter, Bashford catching his hissing cymbal sharply between his fingers, abruptly silencing, rolling onwards with a sequence of sculpted metal scrapes. This sticksman is almost always heard locally in a more straight-ahead jazz setting, so this was something of a revelation, witnessing him in a freely improvising environment. A sombre bowing on bass introduced a spectral theme on the sopranos, fluttering and quavering, as the second piece nearly transformed into mainline swing, with Dunmall delivering a beautifully rosy teno solo. He's becoming more of a regular at Fizzle, and his visits continue to be greatly anticipated, as the saxophonist becomes increasingly more weary of the harsh touring life.