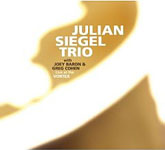 The saxophone/bass/drums trio is a challenge both to the players and listeners, with no hiding place. Saxophonist Julian Siegel, drummer Joey Baron and bassist Greg Cohen prove that it can be creative, involving and exciting. Siegel has escaped the influence of John Coltrane, and it's possible to spend time working out his tenor influences before deciding that he is pure Siegel, with a sound that is fluid, warm and engaging. Siegel seems to enjoy the tenor; he plays it like a friend, exploring the tonalities and the timbre. The clarinet and bass clarinet bring out a harsher side, a harder edge. On "Alfie," one of only two pieces not written by Siegel, the rich sonorities of the bass clarinet are investigated at length. At times Siegel seems to be involved with the sound of the clarinet almost as an end in itself, but he is brought back to earth by Cohen and `Baron.

"Night At The Opera" is a perky, Ornette Coleman-ish theme, probably the most memorable on the two discs. Writing is obviously one of Siegel's skills, but it is his non-abrasive tone on the tenor that will mark him out.

Baron and Cohen have such a wide range of experience that it might have been intimidating for Siegel to play with them. Baron plays with largesse throughout the CD, using the kit sensitively, more a percussion section than a drummer. The metallic-ness of the cymbals is emphasized, as well the varied sounds that he can ring from several parts of the kit and always in service of the music. He has the ability to drive and surprise, all without dominating, his use of brushes on "Alfie" emphasizing an art that some thought lost.

Greg Cohen underpins everything, his bass notes at the beginning of "Atlantic" bringing out the mellow beauty of a great instrument, warmly captured and sharply defined in a great recording.

And this is a great recording. The Basho engineers have made sure that more nuances can be heard than the audience did at the Vortex.

Surprisingly, this is not a regular group. Siegel is based in the UK, and won the BBC Jazz Award for best instrumentalist three years ago. Baron and Cohen are in the US. They all teamed up initially for a gig at the Cheltenham Jazz Festival and, since then, have done a couple of short tours of the UK. The Vortex, in north London, where the recording was made, is a splendid seven nights-a-week venue, which features some of the more interesting musicians.

This CD is about the pleasure of listening to players who love jazz and who listen to one another to produce exciting, satisfying and stimulating music, full of space that will sound good years from now.

Jack was turned on to jazz by a mixture of Stan Getz, Lee Konitz and Earl Bostic.