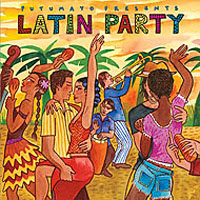 The appeal of Latin music can be witnessed in the inroads it has made, not only into other genres, but also into different cultures. Testimony comes on this recording. Besides South American countries like Colombia, Cuba and Mexico, the performers are drawn from the UK, France and the USA who assimilate the rhythms and come up with several interesting idioms.

The music certainly has a party atmosphere and it gets right off the bat with "Big Apple Boogaloo." The beat is irresistible and the groove is funky, deep and upbeat. With hip hop, rap and plenty of soul from the lead singer, the Brooklyn Funk Essentials hit the spot.

More dance music comes from Ska Cubano, a band with members from Cuba, Jamaica and the UK. "Yiri Yiri Bon" works a ska back-beat with the son, a seamless mesh that uses the tenor saxophone, the trumpet and the piano to voice and extend the melody effectively. The mix is made all the more potent by singer Billy Berry, who draws passion out of every syllable.

Ska and reggae have a common heritage and they find their nook on the instrumental "Las Calles de Medellin" from the Coffee Makers. The pumping ensemble passages are given a larger context by stylistic solos from the tenor sax and the trombone before the trumpet takes it all up a notch.

The mood never flags on this high flying compilation that will zap the blues away.