By KARL ACKERMANN
November 29, 2016
Sign in to view read count 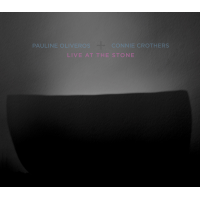 Connie Crothers passed away in August of 2016; an accomplished composer, improviser and pianist, she was not nearly as well-known as she should have been for someone whose talent attracted musical partnerships with Max Roach and Lennie Tristano. Despite playing everywhere from the downtown scene, to Carnegie Hall, to Europe's music halls, her refusal to run parallel to strict lines of free improvisation, avant-garde or mainstream, placed her in a no-man's land where others would later follow. Creative music was her strength and she saw no reason to stifle spontaneity based on arbitrary rubrics.

Pauline Oliveros could be a doppelganger for Crothers if one were to add bellows to the keyboard. An accordionist from early childhood, she is also a pioneer in electronic music and had released a number of recordings where the output was focused solely on electronics. Only later in her five-decade career did she work to a greater extent with her first instrument of choice. Even more outside the mainstream than Crothers, Oliveros nevertheless influenced a wide-range of avant-garde composers including John Cage and Terry Riley, performed with Roscoe Mitchell and Susie Ibarra and has composed for Sonic Youth.

Live At the Stone was recorded in 2014 during Crothers' residency at that not-for-profit performance space in the East Village of NYC. It was the only time that Oliveros and Crothers had ever performed together. Captured on this album is a forty minute extended composition/improvisation titled "First Meeting Still Sounding." Crothers style of playing is both edgy and melodic and she effortlessly moves from complex, percussive assertion to lyrical passages. Oliveros is subdued with electronics and a bit of wordless vocalizing to augment her accordion. More often than not, the effect is drone-like and nicely compliments Crothers' more sharply defined playing.

Live At the Stone is a fitting tribute to Crothers' many layered qualities and the extended format allows her the room to move around freely. The pairing with Oliveros provides an intriguing showcase for both harmonics and harmonies and plays nicely into Crothers' philosophy that composition and improvisation need not be mutually exclusive. Hopefully, this album will trigger broader interest in Crothers' earlier work.

Postscript: Shortly before this article was published, on Nov. 25, 2016, Pauline Oliveros passed away at age eighty-four.