BY ROGER FARBEY
November 29, 2016
Sign in to view read count 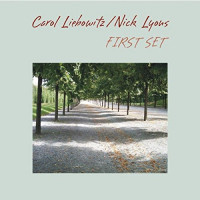 The first seven tracks presented here emanate from a series of live concerts performed in 2012, the final number "Another Time" being studio-recorded in 2007. The live concerts took place in front of an audience in the loft of Connie Crothers under whom Carol Liebowitz studied piano.

This improvisational pair recalls the duo performances of Steve Lacy and Mal Waldron in style and intensity and despite Nick Lyons playing alto saxophone as opposed to soprano, the comparison still holds since Lyons often favours the higher registers of his instrument.

Although the tracks are improvised in the main, there are some characteristics not shared in every piece, "Carol's Dream," for example, benefits from a highly complex and rapidly scored opening, whereas the languid "Reverie On A Sunday Afternoon" meanders in an unhurried fashion, as does the lengthy "The Very Thing."

"Ephemera" displays light and shade in respect of its dynamics, the piano at times almost thunderous. "Roy's Joy" another semi-arranged composition has a lively, near-blues quality and the closing, studio number "Another Time" reverts to a languorous nature.

Liebowitz and Lyons possess an almost telepathic sensibility and as a result the music on this 43 minute CD evinces a hypnotically engaging charm.