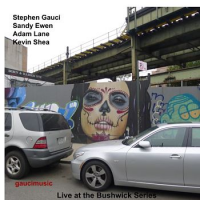 There are certain musicians, let's call them axis musicians, who are always at the center of a scene or movement. Dave Rempis, William Parker and Ken Vandermark can consistently be found at the epicenter of a sound or scene. This is also true of saxophonist Stephen Gauci, the coordinator of a music series at the Bushwick Public House in Brooklyn. His label, GauciMusic, has begun to document some of the weekly concerts, and for those not living in New York this is great news.

Gauci's quartet on Live at the Bushwick Series features a Canadian / Texan guitarist now living in New York, Sandy Ewen, bassist Adam Lane, and drummer Kevin Shea. Their set kicks off with the saxophonist exorcising some demons, initially accompanied just by Lane, before Shea and Ewen give chase. While the bass holds the middle, both the abrading metal-on-metal guitar and drum work act as Gauci's accelerants. The saxophonist's pause highlights the ringing, taut guitar work of Ewen, and soon the quartet is back into the fray.

Gauci's corpulent tenor is meaty enough to preside in such an austere environment. He commandeers the attention throughout with his huge sound, that is a kinder, gentler version of Peter Brötzmann mixed with Charlie Rouse. Music that demands a yes and an amen.