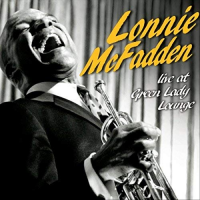 In his own words, tap dancer, composer, trumpeter, vocalist, and bandleader Lonnie McFadden is, "an unapologetic Kansas City jazz guy." He may be a classic "song and dance man" type of entertainer, but Live at Green Lady Lounge demonstrates that he is also more than that.

Lonnie McFadden was born and raised in Kansas City, Missouri. His father Jimmy was one of The Three Chocolate Drops, one of that swingin' city's most famous traveling tap dancing troupes. As The McFadden Brothers, Lonnie and his brother Ronald have performed song and dance productions on bills with The Count Basie Orchestra, Wayne Newton and many others. In 2016, The McFadden Brothers received Lifetime Achievement Awards from the Jazz Museum, and received in 2017 the Living Legends Award from Tapology, an educational outreach organization dedicated to the "Science of Dance, Art of Rhythm." Lonnie has represented Kansas City jazz in such international settings as the Nice (France) and North Sea (Holland) Jazz Festivals, and in 2017 received the Best Entertainer Award from Ingram's Magazine.

Which brings us to this hot August 2017 night in which McFadden inhabits a mixture of band originals and standards associated with the swing era in which Kansas City was king, recorded at Kansas City's Green Lady Lounge with an exceptionally sympathetic trio: Andrew Ouellette on piano, DeAndre Manning on acoustic and electric bass, and drummer Tyree Johnson.

The first thing you hear the leader say: "Well, this whole night is my whole career, basically, and it's based on Kansas City," to introduce the quartet's stomp through the jumping "Moten Swing." Ouelette's piano saunters in as a dapper jazz gentleman to welcome the leader's funky, muted yet mighty, trumpet, then picks up his stride to gallop as he bops and ripples throughout his piano solo. (You can hear in McFadden's laugh after he introduces "Moten Swing" how genuinely he loves playing this tune.) "Moten Swing" turns into "In the Club," with a rhythm that sounds something like "Ain't She Sweet" but roaring with contemporary jazz power and style, especially when Manning picks up his electric bass and throws down monster funk.

McFadden introduces "Voyager," composed by pianist Ouelette, as, "Easily the most progressive song that I've ever tried to play." Its structure and Ouelette's own playing suggest "Voyager" as the pianist's tribute (or extension) to Herbie Hancock's classic "Maiden Voyage." But when the leader steps out front to solo, he's a no doubt jazzman, tearing into and across the rhythms like Freddie Hubbard and Wayne Shorter simultaneously inhabiting one singular, mythological melodic flamethrower. Composed by bassist Manning, "Get Ready" also sounds like a Hancock composition that rocks hard and bounces off of the drummer's New Orleans shuffle beat; McFadden's trumpet solo parries and thrusts with that hard-rocking beat, building into the wordless worship of pure jazz joy.

The more you listen to Live at Green Lady Lounge, the more jazz—broad and vast and deep—you'll hear in it.