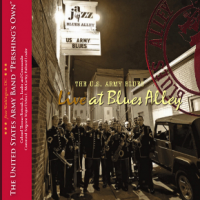 Times have surely changed since The U.S. Army Blues was founded in 1942 (as "Pershing's Own," the Army Dance Band) to entertain soldiers and civilians in combat zones during WWII. But this Blues band has managed to keep pace, and has performed at the Monterey and Montreux Jazz Festivals and at New York City's hallowed Birdland, sharing these and other stages with Dave Brubeck, James Moody, Dr. Billy Taylor and other jazz greats.

Live at Blues Alley presents one of America's few remaining full-time big bands and the US military's premier jazz ensemble onstage at the historic jazz supper club Blues Alley in Washington, DC. "I can honestly say that you are seeing one of the swingingest bands in America today," said Blues Alley owner Harry Schnipper as they came onstage. Simultaneously honoring DC native Duke Ellington and featuring sixteen different soloists and seven composers from the ensemble, all under the musical direction of Chief Warrant Officer Charles Vollherbst, Live at Blues Alley absolutely proves it.

They open with "Main Stem," an Ellington composition that Duke first recorded in 1942 as a 78-RPM single. It swings with all the dexterity of a small band and the power of a large one, with tenor saxophone and trumpet solos buzzing like jitterbugging bumblebees, and clocks in under three minutes. Their lush arrangement of Horace Silver's "Barbara," mined from Silver and Brass (1975, Blue Note), also suggests the Duke's regal musical splendor and quite naturally spotlights thoughtful solo passages from pianist Anthony Walker. Walker's piano introduces the melancholy "Bayou Farewell" with the sad yet hopeful sound of saying goodbye to someone you love.

Live at Blues Alley nicely balances jazz tradition and adventure. Mark Wood's trumpet marches at the head of Tommy Newsom's famous arrangement of Hoagy Carmichael's classic "Stardust," originally written for Doc Severinsen's trumpet and his Tonight Show television band. Bassist SSG Regan J. Brough introduces the Band original "Dance of the Stargazer," driving bop with melodic echoes of "A Night in Tunisia," with lines thick and mysterious, like Charles Mingus lurking in the shadows of its Tunisian night. Drummer MSG Steve Fidyk more than keeps its drive alive, even duking it out with tenor saxophonist SFC Joseph D. Henson in a crackling duet.

Based on a Nigerian folk song that honors Nigeria's native Ogoni people, the Band original "Ogoniland" showcases how the Band and jazz have become much more global, changing with the times. Massive and deep, it begins like a regal song of state (a national anthem) before the rhythm section set their jazz pots to boiling and the horns begin blowing lusty and hot. The rhythm section seems to especially relish the rhythmic challenges presented by this Nigerian tune, shifting into a smooth, upright bass walking glide that brings "Oginoland" all the way from Africa to Washington, DC, and then leads The U.S. Army Blues back into African polyphony that brings the house down.