By Jeff Winbush
January 7, 2010
Sign in to view read count 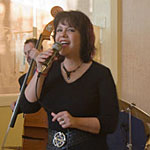 Is it possible to love jazz and not possess the restless spirit of discovery? Probably not. Jazz is a restless art forum and, while it respects it's rich and varied history, it always welcomes talented young bloods to renew and replenish the pool of talent.

Vicki Burns isn't a widely known jazz singer—yet. Some honcho at a record label needs to download Live at Anna's Jazz Island—currently only available as a digital download—and lock her up to a contract. Burns has been plugging away in the Bay Area of San Francisco, delighting audiences and building a reputation as a refined vocalist.

The choice of material is all standards, but Burns delivers the goods with her rich and dynamic voice. The setting is Anna's Jazz Island, a nightclub holding up the tradition of live jazz, and it's an environment where Burns shines, backed by her trio and a few guest musicians. Burns cites Ella Fitzgerald and Rosemary Clooney among her influences, but she's no pallid imitator. Her phrasing and knowledge of how to approach a song with tasteful restraint are impeccable. She could teach a thing or two to American Idol aspirants in how to build to a bravura finish.

Burns is no one-trick pony either. On Robert Johnson's "Sweet Home Chicago" and Billie Holiday's "Billie's Blues," she demonstrates that a white girl from Maine can bring the sassy blues mama attitude when she's got a mind to be one. Burns is equally at ease when the mood calls for her to be sophisticated, sleek and suave ("You Don't Know Me," "All or Nothing at All," "Darn That Dream"). Her scatting isn't bad either, as she gives as good as she gets in a duet with guest vocalist Adam Blankman on "Bille's Bounce."

If there's any complaint to be made about Live at Anna's Jazz Island, it's that Burns' band is serviceable if not remarkable. Guitarist John Nichols and bassist Sam Bevan, in particular, have several bright moments, but Burns is ready to take the next step up in musicians to accompany her.

Vicki Burns is poised to break out to wider recognition as the next decade begins. She lives up to her surname; she burns the mutha out.

Polkadots and Moonbeams; Meditation; Sweet Home Chicago; Billie's Bounce; No More Blues; You Don't Know Me; Honeysuckle Rose/Scrapple From the Apple; All or Nothing at All; Billie's Blues; Darn That Dream; Deed I Do.