By Mark Sullivan
March 1, 2020
Sign in to view read count 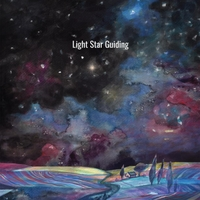 Light Star Guiding is a Polish quartet which makes music collectively, with a seamless combination of composition and improvisation (all the music on this album is credited to the whole band). It is a very contemporary sound, frequently employing repetition and trance. Tenor saxophonist Ray Dickaty says he sees the project as an electric counterpoint to his more acoustic groups, as well as a return to the noise-jazz of his early bands. Guitarist Mikołaj Poncyljusz has been heard most prominently as leader and composer for HoTS. On albums like Numbers (Multikulti Project, 2017) and Live In Trójka (For Tune, 2019) he has pursued a blend of acoustic bebop and more contemporary styles.

"Guiding Intro" makes it clear this is not going to be jazz as usual. It is a rubato exploration with a chant feeling. "And She Said (Goodnight, Flower)" begins with a ritual drum rhythm from drummer Dominik Mokrzewski, followed by an arco solo and a deep drone from double-bassist Staszek Czyżewski. It is primarily a group sound, but includes a long passage featuring solo saxophone with guitar accompaniment. It builds to a big climax, before concluding with ritual drums, with the whole band accompanying.

"The Ancient, The New" features guest vocalist Maniucha Bikont in another ritual groove, which concludes with a repeating saxophone pattern reminiscent of minimalist pioneer Terry Riley, with processed guitar. "Hymnal" has a driving ostinato pattern, and spotlights for saxophone and guitar. "After Frank (Wright)" concludes the album with an atmospheric buildup which climaxes with the whole band, before concluding with a gentle coda. This is a group with a distinctive collective voice, more than the sum of its parts. It will be interesting to see where this approach leads them going forward.

Guiding Intro; And She Said (Goodnight, Flower); The Ancient, The New; Hymnal; Reflection; After Frank (Wright).