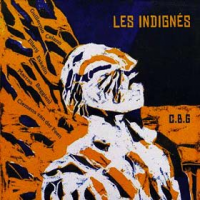 The acronym "CBG" is the proxy for the Celano/Baggiani Group. The improvisational group is based in the Netherlands and has been active for more than ten years. Guitarist Guillermo Celano and drummer Marcos Baggiani have been the mainstays in a rotation that has experienced a number of personnel changes as they have veered between quartet and quintet formations across six albums. On Les Indignés, CBG assumes the smaller-size combo. The core members are joined by bassist Clemens van der Feen who appeared on their Erasing Borders (Trytone 2015)—actually recorded post-Les Indignés—and lastly, the most familiar name to U.S. audiences, Ellery Eskelin on tenor saxophone.

Baggiani, a Buenos Aires native moved to Amsterdam in 2001, to study and play. Mirroring those geographic moves, fellow Argentinian, Celano, focused his career on the robust improvisation scene in the Dutch capital and studied with Ben Monder, Chris Cheek, Mark Turner and other well-known artists. van der Feen has a global performance presence and leads or co-leads three separate bands while playing with CBG. A long-time New York City resident, Eskelin is widely recognized as a key creative force and his resume is filled with like-minded artists such as Gerry Hemingway, Marc Ribot, David Liebman and Han Bennink.

The title track opens the album with Eskelin and Celano tentatively working their way around each other before Baggiani sets a solid pace. The saxophone and guitar eventually find a melodic center while still playing off each other rather than in unison. Before the lengthy piece concludes, Eskelin takes it to an eruptive, improvised solo and holds on until the piece abruptly falls away. The sixteen-plus minute "Bin Laden's Trial" finds the tenor snaking its way around the guitar in a mysteriously aggressive form, and, like a trail that goes hot and cold, the piece slows down, moves forward in fits and starts, never quite letting on what the plan is. Eskelin and Celano convey the feeling of forward movement, sometimes aggressive, sometimes cautious. Eskelin's extended solo plays like an internal dialog, eventually shaken from its internalization by Baggiani's sharp response. The full group finally gets rolling to a common destination on this small masterpiece.

"Parcelas Desiguales" opens with Celano expressing a more sensitive side and Eskelin joining in close harmony, then opening up with a resolute melody that favors controlled improvising. "Morphology: Emptiness," an experimental interstitial, nicely bridges the earlier, and more insistent pieces with the "Demagogical Dreams of a Beautiful World" which manages to be both melodic and unconventional. "Borges and My Father" initially retains that pace and atmosphere but later morphs into uninhibited free improvisation. "Bicicleta Boy" closes the set with another combination of melodic elements and disjointed improvisation.

Les Indignés (The Outrage, in its translation to English) is so beautifully complex that it could be described in language a sommelier may use. There are moments of wistfulness that sit apart from grooves and occasional free blowing and shredding guitar. Five of the eight compositions are quite lengthy and thus open themselves to the patient development of ideas and alternative directions. Some of the ironies that are baked into the composition titles, play themselves out in the paradoxical paths the music follows. As that sommelier might say, the music breathes with life.