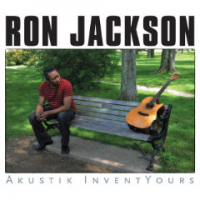 Guitarist Ron Jackson, known as a composer, performer, and educator in a wide range of contexts in his present headquarters of New York City, has enjoyed an adventurous life. Born in the Philippines to a military family, he moved many times as a child, music being his constant companion. Though now known for his work as a jazz aficionado, Jackson always had a soft spot for the acoustic guitar. Moved by the unplugged adventures of Steve Howe, Leo Kottke, Michael Hedges, and the Paco de Lucia/Al Di Meola/John McLaughlin trio, he continued to fan a pilot light of inspiration until the stoking of this album. "This is something I'd been wanting to do since I was a kid," Jackson tells me. "It's the kind of music I always wanted to play. Even when I was studying at Berklee, I was mainly into jazz composition and arranging. Composition was my first love."

For this debut solo album, two years and hundreds of hours in the making, Jackson compiled a robust set of self-penned tunes. "I decided to make it all original," he says, "because I wanted to get away from people associating me with jazz standards." To that end, Jackson reached deep into his past as a way of defining his future. It's not only the technique but the variety of temperaments that makes it all so compelling.

Like the metropolis he calls his own, the guitarist embodies not only a broad stylistic range, but also a cultural multiplicity that can only come from a well-traveled heart. It's the same kind of documentary spirit that breathes through the minor-inflected "Park Slope" and "Train to Groningen." Some such pieces, like "Old Dusty Road" and "Bucket Blues," feel close to home, while others more distant from the here and now. In these, too, Jackson employs skillful multi-tracking to maximize his improvisational reach.

More than times and places, however, it's people who seem to make the most vivid appearances, as in the tender "Ernestina" (the album's oldest, dating from the guitarist's twenties) and the songful "Australian Love Affair." Even more lucid are the buoyant affirmations of "Tina Number III," the first two parts of which are destined for a future record. Jackson draws on a spectrum of atmospheres—a flamenco-style touch here, a whiff of nostalgia there (as in "Londonderry Air," his arrangement of the ever-popular "Danny Boy")—but always with genuine yearning. His meticulousness pays its biggest dividends in the ballads, in particular "Your Eyes," which sounds like a lost tune of Ralph Towner, another influence. Jackson's carefulness also enriches the album's mood pieces, which range from forlorn ("Too Late") to whimsical ("Going Bush") to comforting ("Jamaican Sunset").

All of which entails a more-than-convincing package of Jackson's melodic acumen. This album is one from which life overflows with optimism and resilience. Says Jackson, "It's the one CD where I produced everything myself, so I'm proudest of it. I wanted to put out something I had complete control over, against what people thought I should be releasing, and this is it." Such thinking is true to the album's titular wordplay, which entreats us to be ourselves, and welcomes anyone with ears to hear.