BY DAN BILAWSKY
May 13, 2015
Sign in to view read count
Track review of "Lembra De Mim" 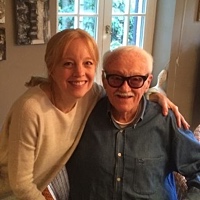 June of 2015 can't come soon enough for fans of the Maria Schneider Orchestra. That month will see the release of the The Thompson Fields—the long-awaited followup to the stunning Sky Blue (ArtistShare, 2007). In the meantime, Schneider has been gracious enough to deliver a pair of bonus tracks to tide everyone over until the album drops: an updated take on "Dance You Monster To My Soft Song," a piece originally presented on Evanescence (Enja, 1994), and her arrangement of Ivan Lins' "Lembra De Mim."

Both numbers, while newly recorded, hearken back to different points in Schneider's career. "Dance You Monster To My Soft Song" looks back to her debut and the dawning of what's now considered one of the most distinguished large ensembles in jazz, and "Lembra De Mim" looks back ten years to a time when Schneider wrote that arrangement when touring with harmonica legend Toots Thielemans, Lins, and the Danish Radio Orchestra. Schneider released the latter number on April 29, intentionally gifting it on Thielemans ninety-third birthday.

While Thielemans has retired, Schneider was able to convince him to record this and the results are predictably pleasing. He works his breezy magic over the rich harmonies of the band and mingles pleasantly with Lins' soothing voice. Other guests include Rogerio Boccato, who provides light percussive coloring, and guitarist Romero Lubambo, who adds low-key guitar work to this mellow Brazilian beauty.

This piece, while miles away from the music Schneider will release shortly, has something in common with all of her best work: it speaks to her ability to brilliantly tap into a wide spectrum of colors and timbres in her gorgeous musical paintings.