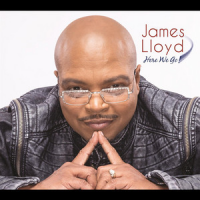 Solo albums from a member of a longtime band are usually driven by one of two impulses. Either the material is something which doesn't quite fit the group's sound or it is dipping a toe in the pool to test the waters for splitting from the band. Along with drummer Curtis Harmon, keyboardist James Lloyd has been a constant in Pieces of a Dream since 1978 when Grover Washington Jr. took them under his wing and signed his fellow Philadelphia natives to his production company.

Lloyd and Harmon have kept Pieces of a Dream busy in the studio and on the road for nearly 35 years, but yet little in their repertoire springs to mind as a signature moment or as essential listening. Their style of crossover soul/pop/jazz is easy to listen to and easier to forget. Here We Go! is Lloyd's first release outside of the confines of the band, but it is no radical departure from standard Pieces of a Dream fare. This will likely please Lloyd's fans and baffle everyone else wondering why he bothered with making a solo album which pretty much sounds exactly like a Pieces of a Dream album.

The opener "Here We Go" is a romper stomper sure to find a home high on the smooth jazz charts and the aptly titled "Moving Right Along" doesn't squander the saxophone stylings of Najee. "Pay It Forward" shows off Lloyd's not-inconsiderable skills on the 88's, but its a straight ride down Main Street with no curves or turns. The latter half of the album is typically generic ballads and up-tempo numbers made distinguishable only by the different titles.

It has become an standard practice to keep the proceedings short and sweet with songs fading out after four or five minutes and into the next selection before the possibility arises of improvisational exploration. However, smooth jazz doesn't reward that sort of thing and Lloyd remains doggedly faithful to the formula even when its to his detriment. The innate talent is there. You can hear it underneath the safeness of "Granted Wish" and "Almost There" but Lloyd stubbornly refuses to stray from interchangeable piano-driven noodling. If only he stretched things out a bit more, he could possibly surprise even the most jaded ears.

"Y-Town, Y-Not?" flashes some sparks of creativity with Lloyd's keyboards doing a pretty good job of standing-in for a trumpet. The "drums" sound a little tinny, but the slip-and-slide playfulness of the tune makes it a stand-out. Alas, it is more a happy accident than a promising harbinger of coming attractions from Lloyd.

As it stands Here We Go! is pleasant without ever becoming engaging and listenable without ever being memorable. It should perform well enough to encourage Lloyd not to wait three decades before striking out on his own. Next time, maybe Lloyd will dare to go beyond expectations if only to see how it feels.

Here We Go; Move Right Along; Pay It Forward; Granted Wish; No Holds Barred; Almost There; Y-Town, Y-Not?; Within Reach; Much O'Blige; For The Duke In Me