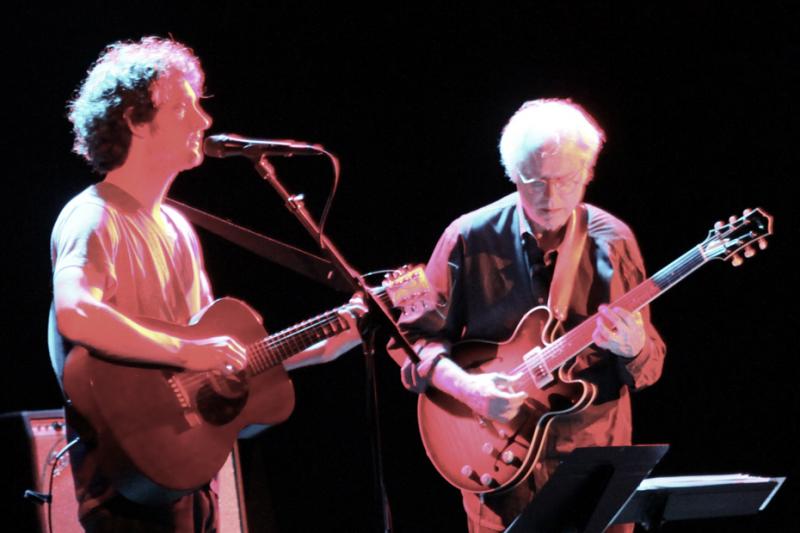 An improvising dialogue has been steadily developing between veteran alto saxophonist Lee Konitz and recently emerging pianist Dan Tepfer. Konitz is 84, Tepfer is 30. It's already been three years since their collaborative album on the Sunnyside label , 2009's Duets With Lee. The relationship continues, its aim a flowing exploration, but there's nearly always a tune at the core, often one with a deeply established substance. This was a one-nighter, with just two sets, so it was no surprise that the Standard was pleasingly packed down at the front tables. This was one of the club's most intimate gigs, and the audience was suitably hushed, gratifyingly concentrated in anticipation of the music to come.

The beginning was slightly uncertain. Konitz had arrived from Germany the previous day, and had inexplicably left his horn behind. Magnifying the perplexity, it seemed as though he'd postponed familiarization with a borrowed alto until the very last onstage minute. He looked doubtful about the mouthpiece and his chosen reed was warped. Curious. So, Konitz swiftly left the stage, suggesting that Tepfer play one of his own variations of the Goldberg Variations, as heard on their recent Sunnyside album.

This was quite an unsettling start, and no one was helping out Konitz. He wasn't given a separate microphone to engage with the audience, so had to project his voice through one of two overhanging ambient microphones, which were presumably requested as his preferred horn amplification. Then, Tepfer was somewhat inert in terms of helping out his elder, and a video cameraman in the corner was similarly mute when Konitz addressed him, our saxophone statesman left isolated in his moment of doubt.

Following the engaging Tepfer exploration, Konitz returned, and the pair began its journey. Initially, Konitz was visibly dissatisfied with his mouthpiece, making frequent adjustments. After about five or ten minutes, it was finally possible to enter an undistracted state where the music's transcendence was allowed to develop naturally. It was at this point that Konitz and Tepfer eased into their special rapport, and the audience became relaxed enough to fly. Not that complete passivity was ever desired for this session, just the freedom to be immersed unselfconsciously in the duo's very particular sonic dream-world. Konitz, being a willfully eccentric character, may well have been deliberately staging this elaborate ritual as a teaser for the crowd.

Once flowing, it was evident that Konitz mostly adopted the leading role, guiding the melody whilst Tepfer elaborated, punctuated, emphasized and underscored. Tepfer filled his soloing with lively, dynamic detail, so there was always a sense of flowery detailing, clinging on to a linear structuring. Konitz was invariably clean-cutting, sour-squirting convoluted phrases that wriggled and fidgeted upwards as the improvisation refined its logically bittersweet taste. Each note was carefully enunciated, delivered with an angular bite. Konitz filled his hard-edged precision with a glimmering emotional expression. Always keen-edged, the duo's extensive streams met long-separated tributaries each time Konitz and Tepfer connected or coincided, pulling a piece together before nimbly traipsing off to separate corners of the glade. The troubled origins of the set were soon a distant memory, and the bulk of the pair's playing created a completely spellbinding aura of musical intimacy. The audience was ensnared by this rare craftsmanship.

Later that same evening, another duo set was on offer down in Greenwich Village. Although not quite as extreme as the Konitz-Tepfer generational divide, a similar dynamic was in place for the meeting between guitarist Bill Frisell and multi-instrumental songster Sam Amidon. Frisell is 61, and Amidon is, at 30, the same age as Tepfer. Frisell is known for his collaborative activities, but Amidon has hitherto been known chiefly as a solo artist. On a previous occasion, Amidon played for a handful of folks at The Stone, but since then, his indie-troubadour status has risen dramatically. Interestingly, the newly-dawned combination of these two artists has the effect of bringing in audience members from at least two camps. Given that Frisell has long dwelled in the rustic, rootsy, old-timey country zone, their pairing, although initially surprising, seemed upon consideration to be perfectly natural.

The softly concentrated mood of the Jazz Standard was carried downtown to the Poisson, where that basement club's accustomed low-level mood lighting exacerbated the intimate aura of the cocked-ears crowd. A high degree of empathy was immediately apparent, between both audience and performers. The shapes were craftily constructed as a meeting between faint country whisperings and electronic stretchings, as Frisell dropped in a few surprising sonic tweaks to his guitar solos, exaggerating the natural tendencies of banjo-clang with his string mimicry, responding to Amidon's back porch pickings. Their pieces veered from instrumental to song, but always probed the possibilities of music that approached the silence of the rural backwaters. Well, at least relatively, besides an abundance of tiny creatures. For NYC, it was as quiet as it gets.

Both Frisell and Amidon were similarly caught up in a kind of archetypal folksiness, where multiple roots musics refined into a style that still bore their personal imprints. Frisell is almost an old man, and Amidon wants to be one before his time has come. Alternating between banjo, fiddle and acoustic guitar, Amidon had the complete troubadour kit-bag. The pace was kept deliberately hesitant, decidedly floating, but this didn't deter from the constant audience attention as the crafty twosome wove their delicate patchwork.

West Coast invaded East Coast at this less-frequented joint adjacent to the West Side Highway. Reedsman Vinny Golia and bassist Lisa Mezzacappa had both freshly arrived in town from Californian parts, each with a clutch of gigs to play in a variety of settings. For this first one, they coincided together in duo formation. Once again, this was a meeting between an elder statesman and a younger rising star. In fact, Golia (66) is a Bronxian child, so this was almost a homecoming, even though he now lives in Los Angeles. Meanwhile, Mezzacappa (37) originally hails from Staten Island, but has been dwelling in San Francisco for just over a decade. Golia was travelling light, concentrating on soprano saxophone, clarinet and various wooden flutes. The pair was first on in the evening, and so was conscious of compressing its improvisations into a concise form, perhaps too aware of the looming curtailment.

The pieces were fairly short, but upheld a similar mission of questioning, imparted thorough attention to mood, space and poise. Clarinet and bass circled and spiraled, both busy in their tiptoe creeping. The pair's rapport was consistently on the edge between traditional jazz and free abstraction, with shades of old time blues jumping into extreme flutters, speed-switching with hair-trigger interactions. Mezzacappa made glancing bow-flays, Golia introduced a shakuhachi-like flute, his tough trilling leading into a saxophone sequence. An already cool sharpness was intensified by the harsh acoustics of the room. It was fortuitous that they eventually elected to extend with an encore, as that was the set's fittingly climatic point.

There's another significant age-span between guitarist Wayne Krantz (55) and the younger Californian drummer Cliff Almond (though exactly how much younger, it's been difficult to ascertain). Krantz was gearing up for a four-night Iridium stint with two different lineups, but this Monday show found him sneaking into the regular Les Paul slot, where the pioneering guitarist's old cronies continue bearing his torch. On the surface, this was an unlikely environment, but these Monday nights are gaining renown for adventurous visiting, the pinnacle of which was represented by gonzo guitarist Ted Nugent's alarming appearance.

After the usual set from Les Paul's Trio, Krantz bridged the gap by joining them for some blues lickin'—a rare opportunity to hear him in a more linear mode of expression. Then, the trio left the stage and was replaced by Almond, who was to be the drummer in one of Krantz's two bands later in the week. Almond might be best described as a junior Keith Carlock, who is Krantz's well-ensconced stickman compadre. Carlock was due to appear in the other unit, Krantz's road-worn trio with bassist Tim Lefebvre.

Whilst some folks might have mourned this two-thirds, bass-less situation, it actually presented a forum for appreciating the intricacies of Krantz's style, in more of a relaxed free-form ramble. Not that there was any lack of disciplined tightness between strings and sticks. Almond already possesses a practiced and intuitive melding technique with Krantz, scattering suddenly shifting polyrhythms with a bewildering rapidity that was nevertheless always on the right forward-pushing track. Normally, time-changes and melody shifts happen with a mysterious unity when the Krantz trio is splicing tight. A similar experience was found in this duo dialogue, though with extra space allowed for phrase-wriggling and snicking embellishments. Krantz is continuing to evolve his peculiar vocal-guitar twinning technique, which is part jazz scat, part Indian tabla-talk. His laidback delivery was deceptive. Yes, this was Krantz in relaxed shape, but the music's spontaneous reactions were still right on the edge of scimitar precision. A cerebral gush, or a gutsy rumble?