BY KARL ACKERMANN
March 3, 2017
Sign in to view read count 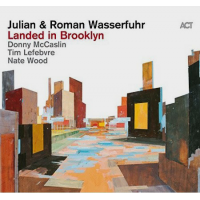 German brothers Julian and Roman Wasserfuhr have been highly regarded talents in their home country since they were teenagers. Signed to the ACT label in 2006, their debut album that year, Remember Chet (for Chet Baker), showed remarkable maturity. By their sophomore outing Upgraded in Gothenburg (2009), the brothers had sufficient brand equity to draw bassist Lars Danielsson and trombonist Nils Landgren to their group. Landed in Brooklyn is the brothers fifth album and derives its name simply from their arrival in the epicenter of creative music, the location they had chosen to create this album.

Trumpeter Julian and pianist Roman, inspired by David Bowie's Blackstar (Columbia, 2016), wanted to bring in what they considered key factors in that pop album's success. To that end, they recruited saxophonist Donny McCaslin and bassist Tim Lefebvre from Bowie's final studio recording. Drummer Nate Wood is on hand and had studied with Charlie Haden and performed with a wide range of artists including George Harrison, Sting and McCaslin.

The opening number, "Bernie's Tune," is upbeat and with an appealing contrast between the round, smooth sound of Julian Wasserfuhr's flugelhorn and his brother's more sharply defined piano. Lefebvre's rhythmic groove and an impressive brass solo deliver a fusion feel to "Tutto" while "Tinderly" recreates a classic mainstream horn frontline with McCaslin's tenor and Julian Wasserfuhr, here on trumpet. "Durch den Monsun" is the cover of a piece from popular German rock band Tokio Hotel and it is the most wide-open selection on the album. Featuring a sizzling solo from McCaslin and swelling whirls from Wood, it has a powerful, driving quality. The brothers' affinity for Sting's music began with Gravity (ACT, 2011) and a cover of "Englishman in New York" and continues here with a confident treatment of "Seven Days." The moderately paced closer "First Rays of Dawn" creates a festive atmosphere and makes for an upbeat conclusion.

Solo performances are minimized here as they typically are on the Wasserfuhrs' recordings and the flashes of freer improvisation from both brothers can make that self-control a bit frustrating. McCaslin and Lefebvre do help make Landed in Brooklyn feel less overly-polished than the Wasserfuhr's previous outings and that is a pleasant change. Still, the brothers most often opt for sophistication and a refined stylishness and they play to that sensibility as well as anyone.