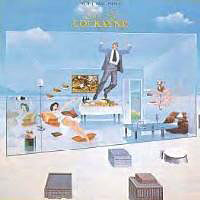 Three years after Alive & Well: Recorded in Paris (Harvest, 1978), Britain's Soft Machine suddenly resurfaced momentarily with Land of Cockayne. Given the experimental nature of its glory days and a latter-day fusion masterpiece in Bundles (Esoteric, 1975), it's understandable why Cockayne has historically been considered Soft Machine's dullest moment. But time heals all wounds, and Esoteric's remaster reveals an album stronger than it seemed at a time when it was impossible not to draw comparisons with the Soft Machine of days long past

Land of Cockayne didn't start life as a Soft Machine album, and the personnel bears little connection to even its final live incarnation. It was, in fact, a solo album from Karl Jenkins—keyboardist and erstwhile reedman who, according to unforgiving fans of the "classic" Soft Machine line-up, was singularly responsible for the group's creative decline. Listening to Jenkins' Soft Machine albums, starting with Six (Sony, 1973), it may be true that the Nucleus alum's penchant for irregularly metered riff-er-amas, neoclassical anthems and hypnotic, Terry Riley-informed minimalism was considerably distanced from the group's earlier compositional complexities, brooding abstrusities and avant-leaning freedoms. Still, based on Bundles, Softs, and the recently unearthed group heard on NDR Jazz Workshop—Hamburg, Germany May 17, 1973 (Cuneiform, 2010), Jenkins' writing was plenty compelling.

A marketing ploy, then, to bring attention to Jenkins' album by loaning it the Soft Machine moniker—and one that largely backfired, the group's fan base a singularly unforgiving beast. On its own merits, nearly three decades later, it's by no means a masterpiece, but neither is it at all bad. Bringing back John Marshall—Soft Machine's longest-tenured drummer after joining halfway through Fifth (Sony, 1972)—and fellow Bundles alum Allan Holdsworth (largely relegated to session man status here, though he turns in characteristically fine solos on the simmering ballad, "Velvet Mountain," and fierier "Sly Monkey"), Cockayne is also notable for other heavyweight contributions from the British jazz scene, notably John Taylor who, hot off three ECM recordings with Azimuth, delivers an incendiary Fender Rhodes solo on one of the disc's longest tracks, "Panoramania."

Jenkins, playing a variety of synths including the relatively new Synclavier, creates a surprisingly broad palette for his recruits. Cream's Jack Bruce—whose visceral fretless playing on the slow-disco groove of the opening "Over 'n' Above" is almost enough to get past its semi-cringe-worthy "nah nah nah" background vocals—is not quite Jaco Pastorius on the Weather Report-ish "Lotus Groves," but neither does the bassist need to be. And Ray Warleigh, who contributes some fine alto sax work throughout, brings the same ethereal bass flute to this disc's minimalist, trance-inducing "Palace of Glass" that he did to Bundles' similarly complexioned "The Floating World."

Not a Soft Machine album, then, and certainly not an appropriate swan song for the group. But with Jenkins' largely fusion-esque writing providing plenty of room for committed, structure-based soloing, and a rhythm section that brings it throughout, Land of Cockayne is an album that deserves to be reconsidered...and, ultimately, forgiven for what it's not and enjoyed for what it is.

Over 'n' Above; Lotus Groves; Isle of the Blessed; Panoramania; Behind the Crystal Curtain; Palace of Glass; Hot-Biscuit Slim; (Black) Velvet Mountain; Sly Monkey; A Lot of What You Fancy.