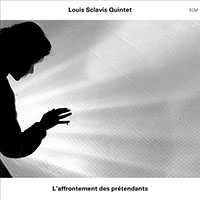 Clarinetist Louis Sclavis takes his group for a rollicking ride on L'affrontement des Prétendants, a wonderfully adventurous record of original tunes by the members of his new quintet. Sclavis has piled up a considerable discography of ensemble work, and this new one features a novel group of French musicians who have not previously recorded with Sclavis (except for bassist Bruno Chevillon). The music on L'affrontement flows with a natural cohesion, from the delicate ballad "Distances" to the mid-tempo polyrhythms of "Contre contre." The explosive freedom of the aptly titled "Possibles" leads into an off-kilter funk groove after a couple minutes. The connection may not be obvious, but it works.

A certain flavor of compositional rigor pervades many of the pieces on L'affrontement. These are generally not jams, improvised in the moment—rather, they tend to obey rules regarding tone, harmony, and pulse. For the most part, the group prefers to take structural ideas to their logical extremes. The sprawling concerto piece "Hommage a Lounes Matoub" launches from a gentle trumpet fanfare into an extended cello solo, then evolves into neo-tribal rhythms with plenty of room for everyone to stretch out. Cellist Vincent Courtois makes prominent appearances throughout, providing intermittent harmonic cues for the soloists. This piece is the cornerstone of the record, and it offers the most open space. The recurring North African theme reinforces the fact that Sclavis dedicated the piece to Algerian singer Lounes Matoub. (Yet another signal that this group remains acutely connected to French—and French colonial—culture.)

For a quintet record, L'affrontement offers a lot of space: the playing field rarely seems crowded. When the musicians get together, they really get together. Gentle lyricism, funk, polyrhythm, and the bell-clear melody all have a place here. This music represents a major step forward for Sclavis's ensemble conception, and it only helps that he chose a fresh collection of musicians to make the recording. (Spend some time checking out trumpeter Jean- Luc Cappozzo and cellist Vincent Courtois. They're worth it.) Listeners with a taste for organized freedom will find L'affrontement a keeper.