By MARK CORROTO
December 7, 2009
Sign in to view read count 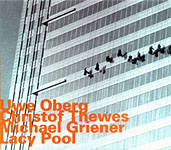 Lacy Pool, by pianist Uwe Oberg, drummer Michael Griener, and trombonist Christof Thewes, demonstrates the "circles within a circle" puzzle that mathematicians have riddled over for centuries. The piano covers of soprano saxophonist Steve Lacy's compositions were accomplished without the use of a saxophone, much like Lacy's interpretations of Thelonious Monk were made without a piano. Oberg's task of fitting a certain music (that of Lacy) within the circle of this trio, conjures multiple musical circles of jazz history.

The session has the feel of the hard bop cover band News For Lulu (Hatology, 1987) with saxophonist John Zorn, trombonist George Lewis and guitarist Bill Frisell. Freeing the trio of a saxophone allows the music new interpretation, yet retains Lacy's influence.

Lacy's piano-less covers of Monk used the trombone of Roswell Rudd. Here, Thewes' trombone eschews the precision of a soprano saxophone, taking Lacy's career past Sidney Bechet to older Dixielanders. The simplicity of "The Dumps" is at once thoroughly modern, yet could have come from the early 20th century. Their take on "Blinks" reveals Lacy's Monk influence, delivering an angled musical approach with sharp economy of presentation. Same with their expansion of Lacy's "Hemline," into "After Hemline."

The piece begins as an insouciant dance that shifts into an interpretive free duo between the players; Oberg's hands hunt notes, dancing off-camber behind the soaring trombone while Greiner fills the background. Elsewhere they negotiate the herky- jerky "Stamps" with ease; Oberg's piano shifting to a faux-stride before running dense repetitive chords over slurring trombone and drum pillages. The session concludes with the outright funkiness of "Raps," a sort of hard-boiled, detective groove machine, that lingers all the more.

Stamps; The Crust; Blinks; After Hemline; The Whammies!; Retreat; Raps.