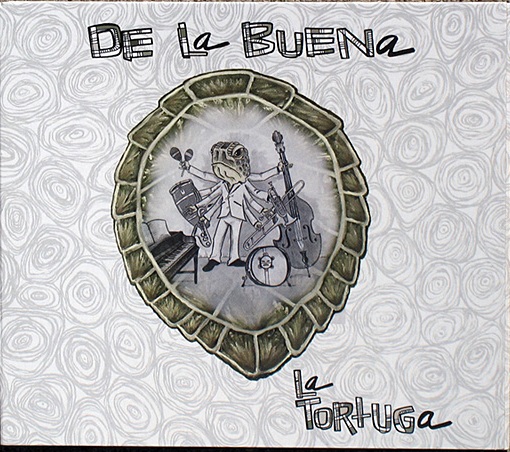 When you consider what would be the animal kingdom's equivalent of hot, lusty Latin jazz, the first animal you think of is most likely not the turtle. At least not until you hear this first studio album by De La Buena, La Tortuga (the turtle).

Milwaukee Wisconsin's reigning masters of Latin and Afro-Cuban jazz, funk and groove, De La Buena shares several members with the retro-soul ensemble Kings Go Forth, including De La Buena co-founders Andy Noble (bass and arrangements), Cecilio Negron Jr. (congas and vocals) and keyboardist/composer David Wake. Wake, whose other credits include work with the inscrutable Lee "Scratch" Perry, wrote, arranged, and co-produced La Tortuga, which was recorded live in the studio and crackles with the energy of a passionate stage performance.

"Señassin" opens with a rippling pool of percussion into which the other instruments quickly splash; Eric Jacobson's trumpet solo scrapes the stratosphere with rockets that sound blasted from Arturo Sandoval's launching pad, while the other horns' arrangement swings with the weighty funk pendulum of Mongo Santamaria's classic "Afro Blue." Except maybe with not so much "Afro," but that comes in through the following tune, the traditional Yoruba chant "Sambaji."

Vocal chants, singing horns, and humming percussion assemble into "Imbe" like an Afro-Cuban army on the march. The middle of Wake's arrangement drops out all the instruments except the horns to conjure a different musical spirit: Three or four different horn lines all sing out then come together in the joyous communion of collective New Orleans improvisation, and then bring the entire ensemble roaring back in to close.

La Tortuga ends with even more of a vengeance. "Pelotas Blue" cooks together Latin boogaloo and Afro-Cuban rhythms into one rocking beat, stoked by hot trumpet (Jamie Briewick) and baritone sax (Mike Pauers) jazz solos. This erupts into the Latin sing-along party jam "Quimbombo," which is introduced by a child's giggling voice and closes in an inspired, climactic descarga that transcends all its different genetic threads to ring out the sound of pure musical joy. Wake takes his only piano solo of the set, a man dually possessed by the spirits of Eddie Palmieri and Ray Charles, in between.

With "Dezdenali," De La Buena closes by bowing toward the dance music of Machito and other Latin bandleaders, an important foundation of modern Latin music, and ends this roadrunner La Tortuga with a big band Latin bang.