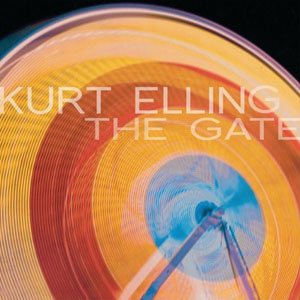 It's amazing how small age differences can impact on the music that resonates in our youth—experiencing it after the fact being so different than living in its time. For 43 year-old vocalist Kurt Elling, the music that reached his young, impressionable ears came from sources as diverse as Earth, Wind & Fire's I Am (Columbia, 1979) , the early-1980s incarnation of King Crimson and Discipline (DGM Live, 1981), and the post-new wave reinvention of Joe Jackson's classic Night and Day (A&M, 1982). And jazz, of course, always jazz.

All these things are brought to bear on The Gate, as Elling continues his longstanding relationship with pianist/arranger Laurence Hobgood, a 16-year teaming that has engendered the kind of comfort that, rather than turning to complacency, encourages a constant pushing of the vocal jazz envelop. A relatively faithful version of Crimson's lyrical "Matte Kudesai" is made special through Elling's ability to both respect the music and reimagine it. Bassist John Patitucci drives the tune, while Hobgood delivers delicate accompaniment and guitarist John McLean layers swelling guitar lines that often mirror Adrian Belew's original parts, but with a more ethereal bent. Elling sings the song his own way, but through subtle turn of phrase rather than broader interpretation, with a clear appreciation of the fine line between loving respect and healthy irreverence.

Like in his recent Ottawa Jazz Festival performance, Elling's swinging version of Jackson's "Steppin' Out" is a highlight, featuring a solo from Hobgood that moves effortlessly in, out and around the song's changes. Even more so, The Beatles' often covered "Norwegian Wood" is a career watershed, Elling and Hobgood's captivating arrangement is lifted by McLean's heavily overdriven and angular solo. Building to an exciting climax, bolstered by drummer Terreon Gully, McLean gives way to Elling's final verse and an outro where the singer builds his own peak with layered voices first introduced earlier in the song, when he takes scat-rooted improvisational liberties, though removed from its general conventions.

Retaining the soulfulness of Earth, Wind & Fire's power ballad, "After The Love Has Gone," Elling delivers it with greater elegance, Hobgood's rhythmic arrangement making for a more insidious groove, that gradually reveals itself as the song unfolds, with saxophonist Bob Mintzer filling in the spaces with evocative accompanying lines. Elling effortlessly moves across his broad range, executing challenging intervals from gritty lows to gentle falsetto, all with precision and pitch-perfect instincts that help build the tune to a soft peak. McLean's swelling chords create an atmospheric cloud above Hobgood's delicate but expressionistic support.

More and more artists are looking to the songs that attracted them to music in the first place, and with Elling crossing boundaries between progressive rock, pop, soul and R&B, he's made an album that's eminently accessible but—produced with tremendous instinct by Don Was (and co-produced by Elling and Hobgood)—reveals multifaceted layers with every successive listen. Elling has been on a particular roll since Man in the Air, and with The Gate he proves that good music is where you find it—and that it's all about putting a personal stamp on it, without losing sight of what made it great in the first place.