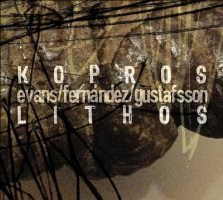 This project refers to dinosaur droppings, a much prized fossil. Indeed, the group's sound (which is occasionally musical) draws from minimal improvisation, noise, and plenty of surprise. All three players are part of the cutting-edge tradition of improvised music: Gustafsson is regarded as the heir apparent to Peter Brötzmann; Spaniard Fernández has been heard most recently with both Evan Parker and Barry Guy; and Evans is a jazz trumpet wunderkind who is featured in Mostly Other People Do the Killing, as well as projects by Parker, Okkyung Lee, and Mary Halvorson.

As an archeological project, this recording is a rare artifact, documenting the collaboration of three important improvisers whose technique is paraded on each track. Sometimes they choose to walk a minimalist line, Fernández exploring the piano's insides—much of the time mimicking a percussionist—while Gustafsson and Evans play with breathy sounds. In other spots, Gustafsson delivers his now-patented shout-smack saxophone punch and Evans brings his growling rumbles. Without the persistence of beat or the bounds of meter, the trio is free to exercise some serious kopros noise-making, Some may think these challenging sounds merde, others an instant archaeological treasure.

My Fingers Were Glue; Man, This Stuff Is Rough; As Each Note Rang True; What Would You Pay To Make It Go Away?