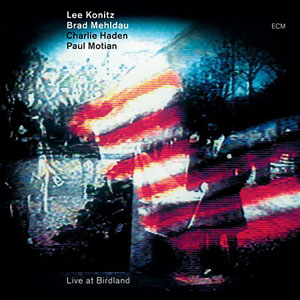 Grist for what seems like an endless flow of recordings, The Great American Songbook has, ultimately, become as much a crutch as it is an inspiration. There's no denying the staying power of music that's near-Jungian in its collective familiarity, but if an artist is simply running down the tunes, à la Real Book—head, solo, head—the music too easily becomes nothing more than a tired retread, a kind of whitewashing that, rather than moving jazz forward, stops it in its tracks. But there are exceptions: pianist Keith Jarrett, for example, whose near three-decade old Standards Trio continues to demonstrate there's plenty of life, still, in these iconic tunes. And there are others. Pianist Brad Mehldau may spend equal time on his own writing, and interpreting more contemporary fare from artists like Nick Drake, Soundgarden and Radiohead, but he's also been steadfastly recreating The Great American Songbook in his own image since the 1990s. And when octogenarian altoist Lee Konitz performed at the 2008 Ottawa Jazz Festival, his hour-long set of off-the-cuff standards was a whirlwind of invention and reinvention, where the material itself might almost have been irrelevant, except that it was chosen for a reason: its inherent potential.

As artists with separate and highly successful careers, Mehldau and Konitz have been linked, in the past, through their participation on recordings for Germany's ECM Records: Mehldau, on a session for saxophonist Charles Lloyd that yielded both The Water is Wide (2000) and Hyperion with Higgins (2001); Konitz, on trumpeter Kenny Wheeler's classic Angel Song (1997). More importantly, however, the two collaborated on Alone Together (Blue Note, 1997), a live trio date with bassist Charlie Haden. Live at Birdland reunites that trio, augmented by drummer Paul Motian, another player intimately familiar with the blurry nexus of form and freedom. There's nothing in the set that hasn't been played endless times before, but as old a warhorse as "Loverman" may be, this quartet's immediacy and flexibility lends it the relentless unpredictability that, despite its gentle delivery, strikes a perfect balance between respect and irreverence, and a relaxed feeling that nobody has anything left to prove.

Comfort can sometimes lead to complacency, but not with these players. Instead, George Shearing's "Lullaby of Birdland" swings amiably, but not from any single player acting as anchor; instead, traditional delineations are thoroughly blurred as it becomes increasingly clear, when Mehldau pushes and pulls near the end of his solo, that time is suggested rather than defined—coming, as it does, from a magical confluence of collective implication.

If there's any other well-known touchstone for this kind of open-minded use of popular song as jumping-off point, it's trumpeter Miles Davis' Plugged Nickel recordings of the mid-1960s. Not that anyone here plays anything like the members of Davis' quintet; these are all players with individual personalities far too strong. But the way that the trumpeter's "Solar" is stretched, almost beyond recognition—Mehldau barely alluding to its theme, as he picks up the baton from Konitz, who reorganizes the opening melody into a quirky, contrapuntal jigsaw puzzle with the pianist—speaks to a similarly unfettered approach,where everything is possible but nothing presupposed. Konitz delivers the familiar head to "Oleo" relatively faithfully, in duet with Motian, but that's about all there is to link the quartet's version to saxophonist Sonny Rollins' classic. As Mehldau enters, and Haden gradually finds his way in, it turns into a liberated tour de force, and the album's clear highlight, as Mehldau's solo builds towards a fugue-like climax that stops unexpectedly, leading to Haden's strongest solo of the set—as ever the epitome of economy.

Konitz's dry, soft-toned delivery makes a tender look at "I Fall in Love Too Easily" another highpoint, the interplay between the altoist and Mehldau exhilarating, paradoxical though that might seem when talking about the album's softest ballad. But it's this quartet's ability to interconnect at the deepest level that makes Live at Birdland a new benchmark for standards interpretation. Konitz, Mehldau, Haden and Motian may have done absolutely nothing to prepare for this specific gig at the legendary New York venue near the end of 2009, but they've been preparing for moments like these their entire lives.

Tracks: Loverman; Lullaby of Birdland; Solar; I Fall in Love Too Easily; You Stepped Out of a Dream; Oleo.

Loverman; Lullaby of Birdland; Solar; I Fall in Love Too Easily; You Stepped Out of a Dream.