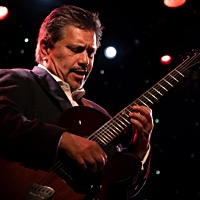 "Brian Nova is one of my favorite musicians to work with and listen to. He's got a beautiful, signature tone on his guitar. He swings like crazy. Great composer and arranger. He's my Man!."
—Kurt Elling (Grammy award winning Vocalist, composer, producer, arranger, educator)

Vivify® Music Recording Artist and Benedetto Guitar Artist Brian Nova is considered one of the top Jazz Guitarists/Vocalists in the nation, according to a recent poll in Jazz Improv Magazine. Joe Pass said of Nova: ‘I feel Brian is one of the finest Jazz Guitarists on the scene!’ He has the distinction of being the only guitarist who was mentored by, and toured with the two titans of Jazz guitar: Herb Ellis and Joe Pass. Rock Icon Steve Miller says: ‘I’ve met and known a lot of guitarists in my career, and ‘B’ is the best guitarist I’ve ever met.’ Nova performs, and records, as a solo artist, with his Trio, Quartet, and his 18-piece Big Band. Brian is on Arturo Sandoval’s Grammy® Award winning CD ‘Dear Diz’, which garnered a Grammy® and 3 Latin Grammys® in 2013 on Concord Records. Brian was also just featured at the Iconic Apollo Theater in Harlem for Ella Fitzgerald’s 100th Birthday Celebration along with Liz Wright, Monica Mancini, Patti Austin, Andra Day, Cassandra Wilson and many others.

Nova performs throughout North America with extended bookings in major cities and as a Jazz Festival artist. His annual European Tour includes engagements in Sicily, Sweden, Denmark, Germany, Switzerland, France, Spain and Italy. His Pan-Pacific Tour includes China, Taiwan, and a sold out tour in Japan every December. In addition to performing, Nova also encourages young Jazz musicians to further their own musical education and stage presence. From 1990 to 1996, he was the Director of Jazz and Guitar Studies for the Music Program at Seattle University. He continues to mentor the next- generation of professional musicians through his master classes and the clinics he conducts around the world.

Brian has released latest CD ‘The Brian Nova Collective’ with Laurence Hobgood, Shelly Berg, Tom Scott and many others. Brian Nova has released seven recordings of his own and is on many others including Ella 100 Live At The Apollo and Arturo Sandoval’s latest CD ‘Dear Diz’. His other releases include “I Could Have Told You”; “The Shadow of Your Smile” released in 2005 to rave reviews; “Blue and Bossa Nova”; “Brian Nova- Alone”; “Live at Belltown Billiards”; and “Jazz Inflections”.

Read more articles
“ I feel Brian is one of the finest jazz guitarists on the scene!”

“Brian is one of my favorite duet partners…..he goes for the groove.”

Jazz Improv Review of Shadow of Your Smile. “Nova has amazing technique, which is obvious from the double-time technical explosion he launches into the first chorus of his solo on this first track. … one of the aspects of a player’s musicianship that is exposed is the ability to play a melody

“ I feel Brian is one of the finest jazz guitarists on the scene!”

“Brian is one of my favorite duet partners…..he goes for the groove.”

Jazz Improv Review of Shadow of Your Smile. “Nova has amazing technique, which is obvious from the double-time technical explosion he launches into the first chorus of his solo on this first track. … one of the aspects of a player’s musicianship that is exposed is the ability to play a melody. Nova demonstrates that mastery and sensitivity on such pieces as “Time After Time,” approached as a ballad, the medium groove “Honeysuckle Rose,” “The More I See You,” and the unaccompanied rendition of “Beautiful Love.”

… Brian Nova’s The Shadow Of Your Smile album provides the foundation for more than an hour of straight-ahead jazz, and highly enjoyable listening.” - Winthrop Bedford, Jazz Improv

Jazz Times Review of Blue & Bossa Nova. “This record really swings! The band behind the very competent Seattle- based guitarist Brian Nova is clearly capable of capturing a groove and sticking with it. Much of that is owed to the nimble rhythm section, but with a vet like Buddy Catlett on bass, how could you miss? Nova himself is an accomplished guitarist, on both electric and acoustic, where his fingers lightly dancing on the fretboard exploring Bossa grooves at breakneck tempos... Let's hear more...” - Mike Quinn, Jazz Times,

Jazz Steps Review of Blue & Bossa Nova. “Nova uncorks a series of tasty, understated workouts on a repertoire of jazz standards and Bossa Nova classics. The guitarists long, single note runs paint some well-drawn narratives... and the rhythm duo of Catlett and Williamson provide supple, swinging underpinnings. The leader's warm unadorned vocal readings add a nostalgia- induced romantic gloss to the proceedings, but it's Nova's string-bending and the collective swing that impresses me most... The members listen as well as they play, and they play really well.” - Joseph Blake, Jazz Steps

The Rocket Review of Live performances. “Like Herb Ellis, Wes Montgomery and Joe Pass before him, Nova is a smooth guitarist who tosses off fluid runs and melodic riffs like nobody's business... The band is swinging... The musicianship is hot and tasteful... Nova's got the goods...”

The Upside of Lonely

From: The Upside Of Lonely
By Brian Nova

All About Jazz musician pages are maintained by musicians, publicists and trusted members like you. Interested? Tell us why you would like to improve the Brian Nova musician page.