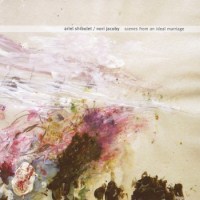 Having existed for decades, free improvisation can be argued to have settled into a kind of routine regardless of the music's underlying abstraction. The soprano sax has become readily associated with the music thanks to the efforts of such pioneers as Steve Lacy, Evan Parker and Trevor Watts. Ariel Shibolet seems only too aware of this, but such is the depth of his musical expression that he plays largely free of the influences of such precedents. As a violist, Nori Jacoby isn't in the same position. Precedents for his instrument are more or less non-existent, which affords him considerably more room to maneuver.

The duo's music is rarefied anyway, in the sense that it's highly personal and hardly rife with echoes of the familiar. Such is the other worldly aspect of "First Marriage" that it's barely possible to tell which instrument is responsible for what. This has the effect not merely of confounding expectations but also of establishing the territory in which both players are naturally at home. Their dialog, as is so often the case in this highly specialized form of improvisation, is as purged of excess as it is of rhetorical gestures. The result is music that's self-referencing in the most intimate way, as if what each of them plays is governed exclusively by what the other is doing and the empirical demands of the moment.

"Second Marriage" is by no means more animated. It's apparent that both musicians are entirely at home with a strain of minimalism which is outside the usual understandings of the term. Jacoby would sound mournful in a less rarefied setting, but here the reasoning behind the music defies such superficial labeling. In so far as Evan Parker's work does have any bearing on Shibolet's, it's manifested on this track as a kind of transposition of Parker's fractious phrasing on tenor sax.

Shibolet's spatial sense is radically his own, as he proves on "Third Marriage" where the dialog is again purged of excess, making for demanding music that's similarly bereft of things that make for familiarity. This is the most heated of the three pieces, but the resulting intensity is entirely of the duo's fashioning, which serves as a reminder of how vibrant this form of musical expression can be.