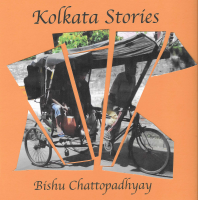 Given this album's title, the fact that the leader's previous album was titled Harlem Meets Hooghly (self-produced, 2020), and even the song titles on this release, it's not unrealistic to be looking for an Indo-jazz fusion release in the vein of John McLaughlin, Warren Senders or simakDialog.

But despite the Indian album and song titles, this is a straight-ahead post-bop album, closer to Monty Alexander than McLaughlin. Only in an occasional passage does one hear influences from the West Bengal state that is home to Hooghly and Kolkata. The vocals on "Ustad Rashind Khan" are of a droning style common in some classical Indian forms, although the song itself is structurally Western jazz. And on the last track, the percussive bass lines contain some hints and flavors of Indian styles. But otherwise, the songs and the playing are purely American.

Having established what this album is not, what do we have?

It's a relaxed, engaging session, full of some nice ensemble interplay in which trumpet, flute, violin, piano and tenor sax all takes turns out front. While Bishu Chattopadhyay is leader and composed all 10 songs here, his arrangements do not emphasize his bass playing. He seems content to help provide the rhythmic foundation for the front-line players, to let his songs and sidemen be the stars.

Only on the last track does he dive into the double bass as a lead instrument. "Saraswati | Two Basses" is a stripped down bit with just Chattopadhyay and Johannes Weidenmueller playing upright bass. It's a very modern piece, a bit avant-garde, yet anchored in a beautiful melody laid out on one track. And as mentioned, while the percussion (tapped out on the body of the bass) is not Indian in instrumentation, the rhythmic patterns are at least partly Indian.

Pianist Davey Lantz deserves recognition for his understated yet solid playing throughout. He, Chattopadhyay and drummer Evan Hyde provide as solid a rhythm section as you'll find. In fact, on an extended trio passage on "Mango Afternoon at Sonali Swapan" (before violinist Caroline Bugala joins back in) you would be hard-pressed to convince your ears you are not listening to a classic Blue Note, Verve or Riverside session from the 1960s. (Bugala, too, does a superb job on the lead on the rest of this particular song, with a deep, warm tone and tasteful solos that again make one wonder why the violin is not featured more often in jazz.)

The trio of Chattopadhyay, Lantz and Hyde also tackle "Sonnet for Ranjon," although this is a more languid, introspective piece, akin to 1990s ECM more than a 1960s U.S. set.

Flautist Kana Miyamoto's lead on the title track and "Balada for Bulada" adds yet another tonal quality to the outing, with some nice forays into the lower register of the instrument. And guitarist Joe Davi brings yet another lead sensibility to the middle choruses of "Shivaji's Harmonium," with a sinuous approach that plays nicely off of trumpeter David Di Trapani and saxophonist Jasper Dutz's more linear turns.

The songs are all well structured, with established melodic themes that lend themselves to the players' improvisations.