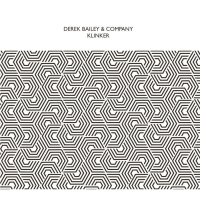 Derek Bailey and Will Gaines had already recorded together on Rappin' & Tappin' (Incus, 1994) and on the video Will (1995), so this archival session, captured live on Thursday 24 August 2000, at The Klinker in London, presents a further opportunity to hear this odd couple. Gaines was 72 at the time of this concert and the old hoofer, originally from Baltimore, had shared stages in the '50s with the likes of Charlie Parker, Lionel Hampton, Cab Calloway, Django Reinhardt and Nat King Cole. He moved to the UK in the '60s and performed for Princess Margaret, played the London Palladium and the Edinburgh Festival. He died in 2014 aged 86. Bailey himself was 70 at the time of this recording and died five years later, on Christmas Day 2005.

This concert, digitally recorded by Tim Fletcher, was the only occasional that Bailey graced the currently-hibernating Klinker Club with his presence, and, fortuitously, this was a memorable gig. The interplay between Gaines and Bailey is good-humoured, empathetic and relaxed. On "An Announcement," Bailey teasingly announces Gaines' arrival on stage by requesting applause (twice). Similarly Gaines talks to the audience on "You Should See Me When I'm Making Money," revealing that he and Bailey go "way back." Other than these conventionally-titled tracks, the remaining ones use the initials of the protagonists involved as titles.

Sometimes, as on "DB/WG2" Bailey seems to take a little time to synchronise with the irrepressible rhythms of Gaines's dancing but they get there soon enough. Gaines is a veritable human dynamo as evidenced on CD2's "WG/MW," and Mark Wastell's cello is almost eclipsed by the sheer boundless energy generated by Gaines who gives an amusing vocal narrative, regaling the audience with previous incidents in his long life (meeting Maurice Chevalier, for example) whilst tap-dancing. After four minutes he is joined by Wastell on cello at which point Gaines concentrates on the dancing. We hear some breathtaking sostenuto and trademark harmonics from Bailey who is accompanied here by Simon H. Fell on "DB/SF1" and the ensuing track "DB/SF2," with Fell alternating between pizzicato and deep arco bass. Any opportunity to hear Bailey is important; he was totally inimitable and a true improvisational innovator, so this double-CD release is very welcome indeed.