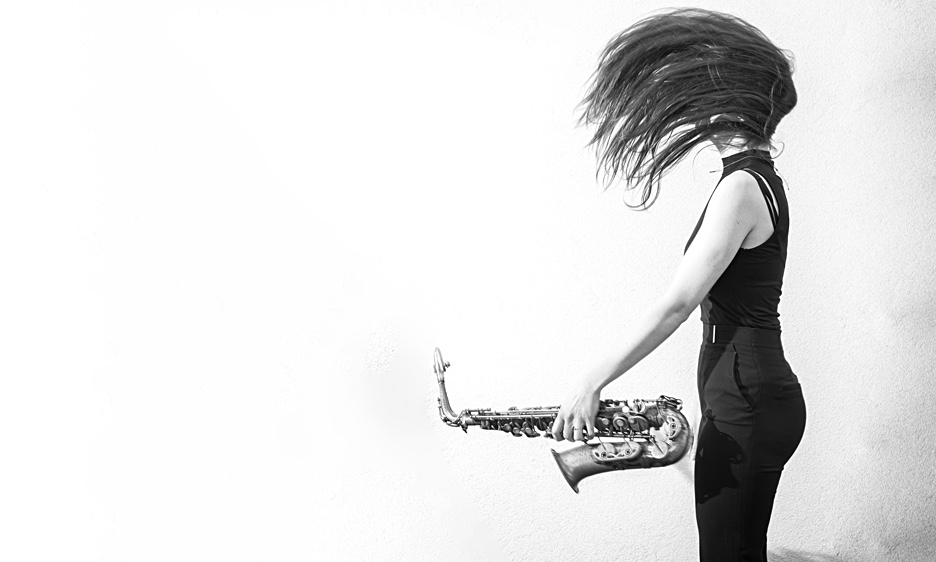 Because of this improvisation and this freedom, sometimes its magic.
—Kika Sprangers

For a 23-year-old, saxophonist/composer Kika Sprangers is showing strong growth and maturity as a musician in her native land of Holland, busy all year with gigs with both a small group and a large ensemble. Busy both blowing alto and soprano sax, but also busy writing material inspired by a variety of sources.

She's only been playing for 15 years, but this year was selected Young VIP of 2018 by jazz programmers in the Netherlands. There are only two selected each year. As a result, she was booked at numerous clubs throughout her country earlier this year. and in July her band played at the prestigious North Sea Jazz Festival at the Ahoy venue in Rotterdam. She also recorded her first CD, Leaves of Lily and is already preparing for a second recording.

Sprangers was enveloped by jazz at an early age.

"The improvisation has always been an important aspect of my music," she says via Skype. "I think it's beautiful what can happen on stage during a jazz performance, which is different than classical or other music. Because in jazz, because of this improvisation and this freedom, sometimes its magic."

That knowledge, still growing, was bestowed on Sprangers at a young age. As a young girl, she took an orientation course in school where students were allowed to try out different instruments. She leaned toward piano and saxophone, but settled in on the latter.

"We already had a saxophone at home because my sister had played for about one year. So I said, 'Why not.' She taught me my first song. I had already an interest for it. I started at age 9 with lessons. At first the basics. At first, it was a weekly thing. I went to my lesson and practiced a bit. After three years, I became very serious."

As she got older and had been playing for a few years, Sprangers discovered a jazz scene. It wasn't part of her school training. It is something she sought out. "I found other young people who were also interested in playing jazz. We started our own band and checked out some music. We played the music we liked and shared it. That made it, really for me, that I could share my musical interests with other young people. That's where it started for me.

Her education and growth during this time naturally included checking out the classic American jazz musicians. Her father gave her a compilation CD that featured various saxophonists, including Cannonball Adderley and John Coltrane. "That's where my interest in jazz started. Also, my saxophone teacher started with Charlie Parker songs. I couldn't play it, but...," she says. "My father also took me to the North Sea Jazz Festival. It's how I was raised as a child musically. My parents also liked listening to music a lot. Even funk, James Brown, soul. Prince. So I was influenced by that."

The biggest spark came from Adderley. "I'm still listening to that a lot and trying to transcribe a lot of his solos. The way that it sounds easy and light really got to me. For me, that was why I was into it. Later I got the Coltrane experience and Wayne Shorter and of course Charlie Parker. It started with Cannonball, with his easy way and lightness. I could connect with that. Nowadays, I'm into other kinds of jazz. But when I started it was "Mercy, Mercy, Mercy" on the live album. In the beginning, it was cool."

Even in high school, Sprangers would find gigs. "I started leading my first group when I was 16, which was like an amateur thing. But I already felt that leading a group was something I liked," she explains.

"Somehow we played gigs," she recalls. "We had this jazz quartet. It's funny, the members of this jazz quartet, three out of four are now professional musicians, so apparently it was a good start. We played venues in our home town. We did a jazz competition and we won this little competition. There were some nice gigs going on and we could play a little. Also, there were some jam sessions. When I look back at it, it's very nice to see the vibe you have when you're young and you don't know everything yet. You don't think, but you just go on stage and play in this jam session. Whereas when you have studied it and you're a professional musician, you're maybe like, 'I'll wait a little,' or first look at what's happening and who's playing. But it was a really nice vibe when we were just doing it and we didn't think about it. Just enjoyed it. It was a really nice time for me."

Unlike many U.S. schools, she says "in secondary school they gave me a lot of freedom to develop my music. There was a lot of space where I could do my musical projects. In my hometown, I had an orchestra with young people and tried things out. When I think of it now I think it's adorable. [chuckles] It was really good that they gave me the space to do that and to develop. I think it helped me make the decision to go on with it."

At the age of 17, she was accepted at the conservatory in Utrecht. She was selected as leader of the saxophone section of the National Youth Jazz Orchestra and toured with that band. In addition to her formal studies, Sprangers continued developing her own music and found opportunities to play in clubs at night. In her third year of conservatory study, she started her own quartet and started writing her own music.

"There was a point where I was trying out how it works and seeing how people react to your music. So I used that group, the quartet, as a tryout thing. Then in the last year of my studies, I was like—'OK, when I'm done I want to continue making my own music.'"

She was on her journey from being a student to a becoming a professional musician. She had a quintet and, for her final recital exam, she played with a large ensemble—her quintet, augmented by other horn players and singers.

"I recorded that concert. After the concert I was happy with the recording. I thought maybe I could use that for the EP. That's what I did. And I did some studio recordings with the quintet and added that to it. That's my first EP, [Leaves of Lily] where I was like 'I can let the audience get to know me and my music.' It gave me some good things and some good opportunities to play. That's where it all started with my own music I think.

The reaction to the CD is more than she could have hoped for. The music connects with critics and audiences. It is comprised of shifting colors and harmonies, and Sprangers plays with a sweet tone that can soar and search, or convey a soft emotion.

"It's crazy. I didn't expect it to be so good, the reactions," she says of her debut recording. "I think I'm really lucky they picked it up first here in Holland. I now have a second press of the EP by Zennez Records. It's still going quite well. I feel the urge to make a new album next year. I think that will come. But I'm really, really happy with Leaves of Lily."

Sprangers is not resting. During the summer she is listening to a lot of music. She is spending time at her piano, looking for inspiration, involved in the process of writing new music, a process that she enjoys.

"I also like to get inspired by non-musical things," she says, including a four-piece musical suite based on a famous Dutch art style. "It was a really interesting process, because I started with a painting, which was kind of abstract. It gave me new insights to start with. I liked that."

The song "Leaves of Lily" is based on a Dutch poem. "You hear the singer. She is presenting the poem," she says. "It was nice to work with lyrics, since I'm not a singer. But I was curious how that would play out, how I could figure out what to work with next. Once you start again, behind your piano, you're waiting for this magical chords or melodies to come. Sometimes I try to observe more than that."

The difference between small and large groups also challenges Sprangers.

"When I write for small ensemble, I'm leaving a lot of space for the musicians to fill in for themselves, which is pretty exciting," she says. "The freedom is less when I write for the big ensemble. Then I think about colors and jazz history. The harmonics and the colors that are used. I think they are really beautiful."

As she contemplates her next recording, Sprangers also wants to continue her education, perhaps in Berlin or Copenhagen, she says. After that, she would like to visit the U.S., go to New York City "and enjoy the vibe and the culture and the jazz in New York. I also want to go to New Orleans. The musical history there can be very exciting." To one day bring a band from Holland to the U.S. and American cities "would be great. That's my dream to come with a band and play my own music."

But her next goal is the new CD with a large ensemble. "After my bachelor's, I was like—'Lets first see and play for a year.' Now it's already the third year that I'm doing it. That's a good thing. I'm enjoying playing a lot and writing a lot. I want to discover more and learn more about that. The first is to record a new album, so I'm very busy with that," she says.

"I'm in the mood for doing things. Because I think if you think too much about it, then you're maybe not doing it. I see it sometimes with colleagues where they are waiting for this magic song or magic debut to open. But I'm sometimes of the opinion that you just have to do it and see what comes out of it. I did that with the EP, which gave me a lot of great things. I think I'm going to just go on with doing my own thing and making music."