Kevin Avery: Everything Is An Afterthought - The Life And Writings of Paul Nelson 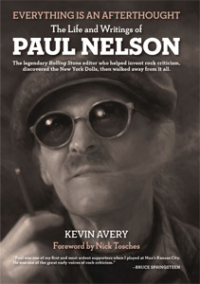 Everything Is An Afterthought: The Life And Writings of Paul Nelson

There was a golden age of music criticism ruled by names like Dave Marsh, Ben Fong-Torres, Robert Christgau, Jon Landau, Greil Marcus, Ralph Gleason, Lester Bangs...and Paul Nelson. Once the greatest advocate of the New York Dolls (whom he signed while at Mercury Records in 1973), Bob Dylan (from the beginning and through electricity and beyond), Jackson Browne and Warren Zevon, Nelson is all but unknown today. The one-time record review editor for Rolling Stone left the cozy confines of that magazine in 1982, falling off the edge of the earth to work at a video store and ultimately starve to death (allegedly) in 2006 at the age of 70. His body was not discovered for a week.

Before 1982, Nelson was the toast of rock criticism, a major mover in the "New Journalism" of the 1960s and '70s. His writing, often written in first person, was very personal without descending into the "writer as God" environs. He began his career editing the influential Little Sandy Review, originally to receive music service from record companies. Out of the Review, he went on to write for a variety of outlets and then work as the New York City office of the San Francisco-based Rolling Stone. Between 1982 and his death, Nelson initially did some freelance writing before abandoning music writing altogether to work at Evergreen Video (now closed) at 37 Carmine Street in West Village New York City.

Writer Kevin Avery has lovingly assembled Everything Is An Afterthought: The Life And Writings of Paul Nelson, a combination biography/reader of Nelson, based on interviews and Nelson's considerable writing corpus. Avery's account of Nelson's life reveals an almost claustrophobic existence of the writer in general, but particularly after leaving Rolling Stone. While Nelson was certainly respected (and for good reason) an air of "that's-just-the- way-he-is" blankets the account. Stubborn and certainly passive aggressive, Nelson withdrew after leaving Rolling Stone. The twenty-four years after 1982 read like a slow slide down the path of least resistance not completely unlike one of Nelson's last musical obsession, trumpeter Chet Baker. Nelson seemed to simply stop living. In writer Anthony DeCurtis' words, Nelson's end was "harsh." Indeed.

ADVERTISEMENT
As bracing as the entire story of Paul Nelson is, it very well may be of great interest to music writers today. With the advent of the internet, the 1970s just as well have been light years ago. Avery's account of Nelson's tenure at Rolling Stone and his correspondence with long-time publisher Jann Wenner, particularly toward the end, is revealing. Nelson's chronic deadline-missing and endless editing resulted in a bibliography much smaller than it could have been. Having said that, what Nelson wrote was excellent, considered among the best by his peers.

Avery hit several highlights in choosing material for the reader. Present is Nelson's Dylan writing and his homage to the New York Dolls (The Village Voice May 26, 1979). His "desert island" article on Jackson Browne's The Pretender rightly finds its place here, divided among two different articles. Perhaps his most famous piece, "Warren Zevon: How He Saved Himself From A Coward's Death" (Rolling Stone March 19, 1981), detailing the chemical dependency intervention and aftermath of Warren Zevon makes for good, if not predictable, reading, even in these days of reality television as seen on A&E's Intervention and TLC's Addicted. That said, it is fun to imagine an interview between Zevon and Dr. Drew Pinsky on Celebrity Rehab. Also included is much previously unpublished writings, his famous unpublished interviews with actor Clint Eastwood.

Paul Nelson may have only been equaled by Greil Marcus for sheer love of music and music writing. He went entirely too gently into that good night, leaving the majority of us in the shadows where Nelson and writer Nick Tosches spent a good deal of their time in Tosches' forward to Everything Is An Afterthought: The Life And Writings of Paul Nelson.