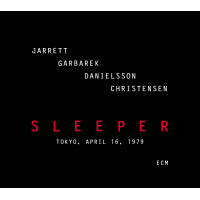 While ECM has, in recent years, been in the process of getting some of its older titles back in print through its Old & New Masters Edition series of box sets—some, like the music on Norwegian bassist Arild Andersen's Green Into Blue—Early Quartets (2010), seeing release on CD for the first time—the German label has avoided adopting the habit of so many others by steering clear of including previously unissued music from the sessions. Nor has the label fallen into the "remastering" trap; unless additional music is being added to the release—as in the case of pianist Chick Corea and vibraphonist Gary Burton's Crystal Silence—The ECM Recordings 1972-79 (2009) box, where In Concert, Zürich, October 28, 1979 (1980) was finally restored to its full, two-CD length glory—the original mastering is being used and, as was clear with The CODONA Trilogy (2009), the label's steadfast attention to production quality from inception in 1969 means there's simply no need to reinvent a perfectly good wheel.

Still, it's great news when the label finds something good in the archives that merits release decades after the fact. Norwegian guitarist Terje Rypdal's classic Odyssey (1975)—recently restored to two discs with the (overdue) inclusion of the original 2-LP vinyl album's fourth side, the 24-minute "Rolling Stone"—has been reissued as Odyssey—In Studio & In Concert (2012), also including a third CD, Unfinished Highballs, from an unearthed 1976 radio broadcast that teams the guitarist's touring band with the Swedish Radio Jazz Group for an entire set of previously unheard Rypdal compositions. That box set has already sold out, with the label in the process of getting another batch pressed, and it's a certainty that, if they've not already prepared for it, the release of pianist Keith Jarrett's Sleeper: Tokyo, April 16, 1979 is destined for the same enthusiastic response.

When Jarrett's heralded European Quartet (also known as the Belonging Group)—with saxophonist Jan Garbarek, bassist Palle Danielsson and drummer Jon Christensen—folded in 1979, it left a small but precious discography, in contrast to the pianist's American Quartet which, in addition to two ECM recordings, had a string of eight live and studio releases on Impulse!. Two studio recordings (1974's Belonging and 1978's My Song) and one live recording (1980's Nude Ants) were all fans had until 1989, when the label issued Personal Mountains, a stunning single-disc set from the same Japanese tour that is the source for Sleeper, and which righted the wrong of Nude Ants—a fine performance, to be sure, but marred by a brittle sound not up to the label's usual standards. While the compositions are, for the most part, nothing new to those familiar with Nude Ants and Personal Mountains, Sleeper presents, for the first time, an entire concert from the tour, and absolutely no cross-over with previously released material.

If Sleeper accomplishes any single thing, beyond being a stellar performance from a group that has rightfully, in the ensuing years, become legendary— and remains a touchstone for many musicians, young and old, decades after the fact— it's that this two-disc, 107-minute recording is a reminder of just how compelling a composer Jarrett can be. While the pianist considers his nearly 30-year run with his Standards Trio of bassist Gary Peacock and drummer Jack DeJohnette to be composition as well—and rightfully so, in its relentless, in-the- moment reinvention of jazz standards and music from the Great American Songbook—it's a different kind of composition, one which is still predicated on something that has come before rather than putting pen to paper to create a brand new piece of music.

The seven songs on Sleeper range from challenging but relatively short-form structures (the relentless "Personal Mountains" and persistently grooving, gospel-tinged "Chant of the Soil") to pieces so intrinsically songlike in nature that it's a surprise they've not been more widely covered (the singable "Innocence" and darkly balladic "Prism"). And if the group's approach to the material is as open-ended as ever—the free-wheeling but thematically folk-centric "Oasis," with its hand percussion and Garbarek's wooden flute, a full ten minutes longer than the version on Personal Mountains, while the Latin-esque "New Dance" clocks in almost six minutes less than the nearly 13-minute reading on Nude Ants—it's that very freedom that makes Sleeper such an essential reminder of Jarrett's compositional acumen and the group's ability to reinvent those songs, each and every night.

The only track making its first appearance with this group is "So Tender." With its more inherently jazz-centric changes, it's no surprise that Jarrett ultimately included it as the only original on Standards, Vol. 2 (ECM, 1985), from those first 1983 sessions with Peacock and DeJohnette. Here, from its brief solo piano intro to the brighter rhythmic approach taken by Danielsson and Christensen, it's further proof (as if any were needed) of the credentials and credibility of Jarrett's band mates. From early work with artists including pianist Steve Kuhn, saxophonist Lee Konitz and, most notably, composer George Russell, Garbarek, Danielsson and Christensen had plenty of exposure to the American tradition, but the cultural differences that have, in many cases, become considerably more dominant in subsequent years—or, in the case of Garbarek, were coincident with his work in Jarrett's group, recording albums like his duo with pipe organist Kjell Johnsen, Aftenland (ECM, 1980), the same year as Sleeper's Japanese tour—are exactly what made this quartet so memorable...and so groundbreaking. This group may not have swung the way Peacock and DeJohnette did and still do, but they do swing, nevertheless.

At this point in everyone's career—with Jarrett continuing to divide his time between the Standards Trio and solo performances, Garbarek spending more time touring than recording with pianist Rainer Bruninghaus, bassist Yuri Daniel and drummers ranging from Trilok Gurtu to Manu Katche, Christensen busy with Finnish pianist/harpist Iro Haarla and a new trio with Danish guitarist Jakob Bro and American bassist Thomas Morgan, and Danielsson continuing to work with British pianist John Taylor and drummer Martin France—it's an unlikely dream to see this group reunite. And, truthfully, a reunion would be a proposition fraught with risk, since the only certainty is that, 33 years after the recording of Sleeper, none of these evolutionary players would be interested in replicating the past, even if they were capable of recapturing the chemistry.

Perhaps it's better, then, to simply have a reminder like Sleeper— truly the archival find of the year, along with Rypdal's Unfinished Highballs— of a time that once was and can never be again. If Jarrett, Garbarek, Danielsson and Christensen are now in very different places, they remain indelibly marked by the experiences they shared—and the music they made—in this very special and unforgettable group.