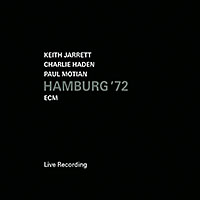 With Sleeper: Tokyo, April 16, 1979 (2012) and Magico: Carta de Amor (2012), ECM Records began digging into its archives, unearthing two live recordings that revealed even more about a collection of artists whose reputations were already plenty secure as some of the label's most important from its early years—in the first case, pianist Keith Jarrett's Scandinavian-centric "Belonging Quartet," with saxophonist Jan Garbarek, bassist Palle Danielsson and drummer Jon Christensen; in the second, the Transatlantic trio of Norway's Garbarek, Brazilian pianist/guitarist Egberto Gismonti and American bassist Charlie Haden. Hamburg '72 is another significant find: a live recording that, unlike Sleeper and Carta de Amor, comes from a group that until now has never been documented on ECM but, like those 2012 sets, is another major winner that adds substantially to both the label's discography and the history of its participants.

Keith Jarrett's group with Charlie Haden and drummer Paul Motian—musicians who, with Ornette Coleman and Bill Evans in their respective pedigrees, provided the pianist with as much freedom to explore as he could handle—had already begun its move from the trio first heard on Life Between the Exit Signs (Vortex, 1968) into the quartet with saxophonist Dewey Redman that, ultimately known as his "American Quartet," debuted on two Atlantic albums released the previous year: El Juicio (The Judgement) and Birth. But when Manfred Eicher organized a 1972 European tour for Jarrett—who had already begun what would ultimately become an exclusive tenure on the producer's relatively nascent ECM Records label the year prior, with an instant classic, Facing You, along with a more curious duo date with drummer Jack DeJohnette, Ruta and Daitya—it was a trio tour that may well have been its last in that format, as Jarrett had already begun touring the US with Redman in tow.

Culled from an NDR Jazz Workshop radio recording from June 14, 1972, Hamburg '72 is as important for Eicher and Norwegian engineer Jan Erik Kongshaug's superb remix from the original multitracks as it is for the exceptional music itself. Motian's dark ride cymbal positively sizzles on the opening "Rainbow"—appearing here a full four years before showing up on the quartet's Byablue (Impulse!, 1976)—which gradually evolves from Jarrett's spare and lyrical a cappella introduction into a more powerful improvisational vehicle for the entire trio, demonstrating both a chemistry built over the course of five years as well as the unassailable magic of this particular evening.

"Everything That Lives Laments"—first heard on the trio's The Mourning of a Star (Atlantic) the previous year and later revisited on the quartet's Mysteries (Impulse!, 1975)—also shape-shifts, but this time from a brief balladic opening into a bass solo that, supported by Motian's chimes and bells, ultimately explores more folkloric territory when Jarrett rejoins, this time on wooden flute. The clarity and transparency of every instrument—including Jarrett's voice when he briefly sings along with his flute—is made all the more vivid by the trio's unfettered approach to taking what was originally a two-minute piece and turning it into a ten- minute epic journey that, when Jarrett returns to his piano and Motian his drums, traverses a broad dynamic expanse, with the pianist's firm touch something that is felt as much as it is heard.

While he's rarely given much credit for it, the nine-minute "Piece for Ornette"—this time featuring Jarrett alone, as opposed to the version on El Juicio that also includes Redman on tenor—suggests that Jarrett's relatively infrequent soprano saxophone work ought to be revisited. Here, bolstered by a "time, no changes" rhythm section where Haden anchors with near-running bass lines and Motian swings with a fire and intensity rarely heard, Jarrett is positively incendiary, sustaining lengthy rapid-fire lines, piercing multiphonics and searing screams.

"Take Me Back"—released the same year on his sole Columbia Records outing Expectations (1972) but, with guitarist Samuel T Brown and percussionist Airto Moreira in the mix, in a more clattering version— explores Jarrett's gospel predilections but, with Motian's exuberant punctuations piercing through Haden's simple but perfect support, is considerably more raucous and, consequently, joyous than his current Standards Trio. That's not a criticism of the pianist's longstanding group with bassist Gary Peacock and drummer Jack DeJohnette; only that Hamburg '72's trio at times sacrifices finesse for a more raw, unfettered and ultimately infectious energy that builds to a climax and then stops suddenly, leaving Jarrett alone to perform a segue that leads into the captivating "Life, Dance"—at just three minutes a brief miniature compared to the rest of the album's eight minute-plus tracks—that is the record's only previously unheard Jarrett composition, its sketch-like form creating the context for an in tandem bass and drums solo where Haden's robust, woody tone and resolute approach to simplicity and ultimate perfection in his every choice becomes one of the album's many highlights.

In fact, Hamburg '72 is a true milestone from the first of its 56 minutes to the last—a classic once lost, but now found again and sounding better than ever. A lengthy version of Haden's "Song for Che"—first heard on the bassist's classic Liberation Music Orchestra (Impulse!, 1969) and the only non-Jarrett original of the the set—closes Hamburg '72 on a particularly open-ended note, with Haden moving from visceral pizzicato to drone-based arco and Jarrett from piercing saxophone to more dramatically building piano, before Haden once again dominates and the 15-minute epic ends with a slow fade of Motian and Jarrett's percussion.

That Jarrett no longer engages in formal composition has been a subject for much discussion and debate in recent years. While his "from the ether" solo concerts and standards-based trio performances can rightly be considered spontaneous composition of the highest order, archival finds like Sleeper and Hamburg '72 do make the case for a certain loss when the pianist decided to put his writing pen down. While it seems unlikely that Jarrett will change his current stance, if ECM can continue to unearth recordings like the stellar Hamburg '72, there's hope that fans of Jarrett the composer—and Jarrett, the more freewheeling, reckless performer—will remain more than satisfied.

Rainbow; Everything That Lives Laments; Piece for Ornette; Take Me Back; Life Dance; Song for Che.