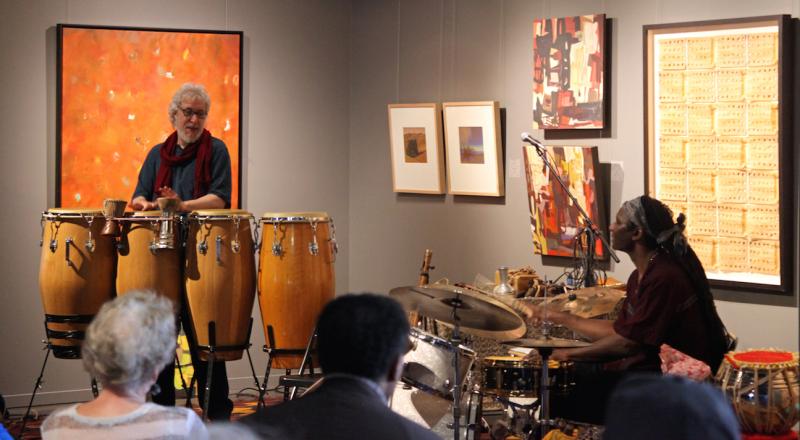 Flute loops were the first sounds heard. Part of a music arsenal, the inconspicuous electronics served to heighten what was a vast array of traditional percussion instruments on hand. The duet Karuna was ending their spring 2017 Midwest tour before a modestly sized but full house at Grand Rapids' LaFontsee Galleries, the surrounding weather the kind of sunny afternoon that might beckon one to linger and catch whiffs of blooming nature out of doors. But these music lovers had other ideas on this Sunday, April 23.

Karuna is the 40-plus year team of Hamid Drake and Adam Rudolph, friends since childhood growing up in and around Chicago, collaborators ever since. Their performance came thanks to Adventure Music's Underground Series, curated, in part, by Lazaro Vega, jazz director of Blue Lake Public Radio.

Featuring spontaneous composition laced with much improvising, the sonic tapestries suggested a spirited mix of East/West energies, primary instruments being trap set and congas (four), played by Drake and Rudolph, respectively. And, of course, there was the intriguing assortment of bells, gongs, flutes and smaller percussion.

Those flute loops mentioned above eventually led to some fine brush, stick and crafted mallet work by Drake, his playing here suggesting sounds more akin to an established jazz-drumming style. With Rudolph first offering light chanting with loops, soon he was sliding sideways over to his conga drums, the two veering in and out of a recognizable pulse. It was clear to see that what was emerging was the mutual act of creation by two master drummers, and that all in attendance would be able to participate as witnesses to a stunning one-time musical event.

The art-gallery setting was ideal for an acoustically well-measured soundscape, not to mention a visual treat, with art not just supplanting the performing artists but available in every direction one might venture to look.

The first piece, clocking in at around 20 minutes, also offered contrasts of serenity mixed with bursts of intensity, up-tempo fevers followed by some lilting free playing, the pair eventually trading fours, then twos, only to merge into a combined sound that was brisk and ear-cleansing with its coordinated grooves and aural colors.

Following some hearty applause, the second piece was introduced by Rudolph, who addressed the audience in a very conversational manner. Acknowledging the beauty of the spring day that seemed to call from the nearby windows and open doors, he sought to assure the assembled that Karuna's music might offer a little "vibrational sunshine" as an indoor alternative.

Moving from drum set to nearby tablas, and congas to thumb piano, respectively, Drake and Rudolph shifted gears quite naturally, the music now suggesting breezes through a dense forest with food for a ripe imagination readying itself to get lost. This piece served to be the concert's shortest, but it continued to set the tone for sonic variety and the unexpected.

With this in mind, the music shifted from congas (skins) to gongs and cymbals (metals), every movement made by the artists deliberate, Drake now seated next to Rudolph, the two of them astride in a front-porch gesture of sorts. Drake took to his large frame drum, his rhythmic hand movements accompanying a clearly reverent, solemn chant, Rudolph in somewhat of a reclined position, offering delicate ostinato support from his three-stringed sintir. The music that emerged seemed to exist outside of time, clearly made in the present but somehow removed from it as well. Sitting side by side, their very conversational playing had the likings of a Sunday-afternoon chat between old friends, the music's extended groove towards song's end resulting in Drake's gentle entreaty for all to join in, clapping along.

What followed was a kind of primal energy unleashed as the two engaged in some fierce conga/drum set exchanges, their instruments filling the galleries as if there were no center to the music, only the music itself. It was free-flowing, Rudolph and Drake sharing drum patterns, locking in at certain points, their obvious telepathy tumbling out for all to see and hear, Drake's bass drumming, in particular, aligning itself with Rudolph's right-hand figures on congas.

And then, there was silence, the two, with eyes closed, clearly still listening to each other, perhaps both wondering to themselves (along with, maybe, everyone else in the room): "Are we finished?"