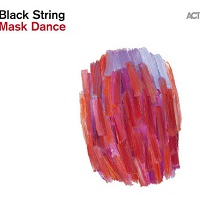 The geomungo—the Korean six-stringed fretted zither—is one of the oldest string instruments in the world, the combination of paulownia and chestnut wood body and twisted silk strings dating to the fourth century. The geomungo is at the heart of Black String, an exciting quartet led by Yoon Jeong Heo, in whose hands this most traditional of instruments spans the centuries, embracing ancient rhythms and textures and aesthetics more akin to rock music. Aram Lee on daegeum, danso (bamboo flutes) and yanggeum (hammered dulcimer), Min Wang Hwang on vocals, janggu (double-headed drum) and percussion are rooted firmly in tradition, while New York jazz-trained guitarist Jean Oh's pedals-driven electric guitar and deft electronics lend the music a contemporary edge. The results are never less than compelling.

The restless stirrings of flute, strings and cymbals announce "Seven Beats," with the geomungo's peculiarly dark bass notes and a slow but insistent frame drum an ominous portent of the storm to come. The rhythmic intensity increments, electric and silk strings exchange short phrases and then lock in powerful riffing, as crashing cymbals and piercing flute stoke the fires. The music recedes, only to swell once more, guitar, geomungo and flute riffing in heady unison. The three move back and forth between looser individual lines and close-knit choreography, driven all the while by Hwang's pulsating frame drums. It's a stirring opener that whets the appetite.

Electronics softly color the folkloric, flute-led "Growth Ring," both sets of strings alternating between rhythmic comping and melodic unison lines on this lyrical feature for the smaller bamboo flute. The full range of the geomungo's armoury is heard on the dramatic folk-metal that is "Mask Dance." Heo works her bamboo pick hard as she deals doomy riffs, seductive bent notes and lightning plucking, like a cross between John Lee Hooker and Tony Iommi; Hwang's shamanistic vocal cries reference ancient pansori traditions while Oh's soaring whammy notes are more Knitting Factory in design.

Heo employs bow and loop pedal to effect a low drone on "Flowing, Floating," a mesmerizing drum and geomungo dialogue in the sanjo tradition (drums and improvising instrument) inspired by the Esbjorn Svensson Trio's take on Nusrat Fateh Ali Khan's "The Face of Love." Hwang's plaintive vocals and reedy-sounding flute are centre stage on "Song from Heaven," a traditional Korean love song colored by gentle gong, echoing guitar and intermittent geomungo pulses. "Dang, Dang, Dang," alludes onomatopoeically to Heo's punchy geomungo rhythms, as unison riffs alternate with melodic lines. Oh unleashes power chords and restless string scratching while Lee shines on an extended flute solo, flitting in and out of sync with the guitarist on a stirring ensemble piece.

There's greater collective abstraction about "Strangeness Moon," Heo's bow once more drawing deep drone from the geomungo's strings, as flute and guitar flirt lightly over sotto voce rattling percussion on a tune that threatens, but never quite manages, to take off.

Black String's Mask Dance is a hypnotic journey through traditions old and new. The potential of the meeting between two such distinct worlds doesn't always sound quite as fully realized as it might be, but on the whole the potent chemistry on this adventurous recording holds the promise of even greater things to come.