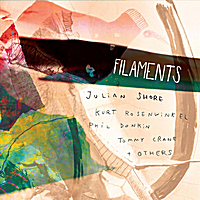 There is nothing wrong with mellow jazz. As long as distance can be maintained from the hackneyed, dialed-in feel of smooth jazz, it can be a refreshing change of pace from the intensity and analytical focus of a lot of modern art music, jazz or otherwise. Listening to pianist Julian Shore's Filaments, there's the sense that he set out to craft music easy on the ears without compromising any of his personal artistic values. The opening "Grey Light, Green Lily" sets the tone for the entire album, its gently chiming, misty piano harmonies, wordless vocals and Kurt Rosenwinkel's yearning guitar solo combine to form a moody, atmospheric sound reminiscent of mid-1980s Pat Metheny Group. Other reference points would be Brian Blade's Fellowship Band and Jeremy Udden's Plainville—bucolic, easygoing jazz that makes no bones about its pop and folk influences.

Vocals figure prominently throughout Filaments. Several tunes feature the voices in the front line singing, horn-like and wordlessly, a strategy that works extremely well for Shore's lilting, carefree melodies. The up-tempo waltz, "Big Bad World," benefits hugely from this approach, and the ensuing dialogue between Shore and Rosenwinkel is one of the album's highlights. "Made Very Small," "Whisper" and "Misdirection / Determined" have lyrics sung by their author, Alexa Barchini, the words perfectly capturing the moody, vaguely emotional aspect of the music. Barchini sings them in a pop- jazz style not dissimilar to that of Norah Jones or Sia Furler. Her voice is close-miked, soft and intimate, and conveys the feeling that she's sharing a secret that is just beyond one's grasp. "Whisper (reprise)" subs a slinky swaying dobro for the femme vocals— a whimsical touch.

Filaments features playing that is both subtle and strong. Drummer Tommy Chase has an easy-flowing yet hard-driving feel, and his awareness of subtle shading and coloration really make Shore's pieces come alive. Shore's piano playing—most prominent on the trio track "I Will If You Will"—is understated yet commanding; eloquent, in a style similar to pianist Bill Evans or, perhaps, Brad Mehldau.

The guest soloists add a lot. Rosenwinkel is utterly distinctive and yet he demonstrates a deep musical kinship with Shore and his music. Saxophonist Noah Preminger digs deeply into "Venus," a ballad that, at times, sounds like a duet with Crane's pattering cymbals and toms. Shore switches to the Rhodes for the up-tempo "Like A Shadow," which benefits from Crane's more aggressive drumming and a bluesy solo from guitarist Jeff Miles. "Give" is a bright, punchy and driving piece that expands the group's sound further to include a brass section. One minor quibble; several of Shore's tunes make use of similar chord progressions and melodic lines, which leads to a sort of aural deja vu.

Filaments is an unusually mature statement from a young pianist who makes full use of a wide-open musical palette. Not the sort of recording that blows its audience away, instead, Filaments quietly seduces, drawing its audience closer.

Grey Light, Green Lily; Made Very Small; Big Bad World; Whisper; Give; I Will If You Will; Misdirection / Determined; Like a Shadow; Venus; Whisper (reprise).