Raquel Bitton: Rhythm of the Heart 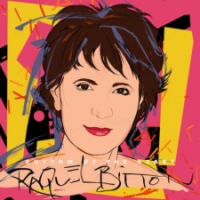 There are two powerful aural cues on Raquel Bitton's Rhythm of the Heart. The first is Edith Piaf. I don't suspect that any song sung in French does not cue a thought of Piaf. The second cue is that of the Latinesque music often featured on the Lawrence Welk Show, the only place to hear this music in some climes and times. Bitton chooses the songbook of Tino Rossi (1907—1983) for her subject. Rossi was the Latin voice of the French Cabaret with movie-star looks, who could capture pure pathos with his voice returning it flavored with the pungent spice of the islands. Bitton creates and navigates this sonic theme expertly, lending it a sound authenticity and grace.

Bitton took these songs, casting them in a variety of styles: Sambas, Bossa Novas, Tangos, Cha-chas, Boleros, Haitian Merengue and Danzon, all to intoxicating effect. Her voice is urgent with humidity; breezy with love and loss. She is supported by a large group from the San Francisco Orchestra, completely augmented by Jorge Trivisonno's bandoneon, the ubiquitous presence of which imparts an Old-World charm in the New World Havana Bitton is building in song. Guitarist Ramon Stagnaro and trumpeter Joel Behrman both supplement Trivisonno in the Franco-Latin soundscape presented here.