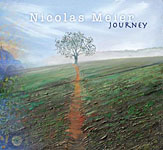 Turkish music and jazz make compatible bedfellows, so it's curious that congress takes place so infrequently outside Turkey. In the late 1950s, pianist Dave Brubeck combined Turkish 9/8 rhythm patterns with classical rondo form and the blues to create "Blue Rondo A La Turk" on Time Out (Columbia, 1959). In the 1980s, Austrian guitarist Wolfgang Muthspiel hooked up with the Turkish pianist Aydin Esen, a fellow student at the Berklee College of Music in Boston, eventually recording the noodling, new age-ish Dialogo (Material Records, 2005). There wasn't a lot of action in between, and there hasn't been much since.

Coincidentally but interestingly, one musician who has in recent years been producing compelling Turkish/jazz blends is another guitarist and Berklee graduate, Nicolas Meier, who hails from Austria's neighbor, Switzerland. Now based in Britain, Meier—whose knowledge of classical Turkish music can only have been enhanced by his marriage to the painter Songul Yilmaz—recorded three Turkish-infused albums for the Naim label in the latter half of the 2000s: Orient (2005), Yuz (2007) and Silence Talks (2008).

Meier has now left Naim for the fledgling MGP label, named after the London studio where Journey was recorded. The line-up includes two musicians who were on board for the Naim discs—clarinetist and saxophonist Gilad Atzmon and drummer Asaf Sirkis—along with a couple of more recent recruits, pianist Jose Reinoso and bassist and harmonica player Pat Bettison.

As on the Naim releases, Meier plays nylon and steel stringed guitars with occasional interludes on the Turkish lutes the glissentar and the baglama (a.k.a. saz). Atzmon is mostly heard on the clarinet, a staple of Turkish music, and Sirkis combines kit drums with traditional Middle Eastern percussion instruments. Meier's suite-like series of compositions—the eight tracks follow each other without any pauses in between—employ Turkish rhythms and melodic paradigms as jump-off points for essentially "pure" jazz improvisation. The Israeli-born Atzmon on clarinet summons up the most vivid echoes of Anatolia; his guttural, broken note strewn, extended solo on "Mountain Baba" is a highlight of the disc. Meier's own playing instead brings to mind the cultural breadth found in the work of John McLaughlin.

Pat Bettison is a strong addition to the band, a responsive bassist and, on top of that, a gorgeously lyrical harmonica player, with a touch not unlike that of the German-born Brazilian specialist, Hendrik Meurkens, on such notable outings as Amazon River (Blue Toucan Music, 2005). Much of Journey is wild, visceral and abandoned, and Bettison's gentle harmonica, featured on five tracks, is a lovely contrast.

A beautiful album beyond frontiers.