Jonathan Kreisberg: From Shadowless to One 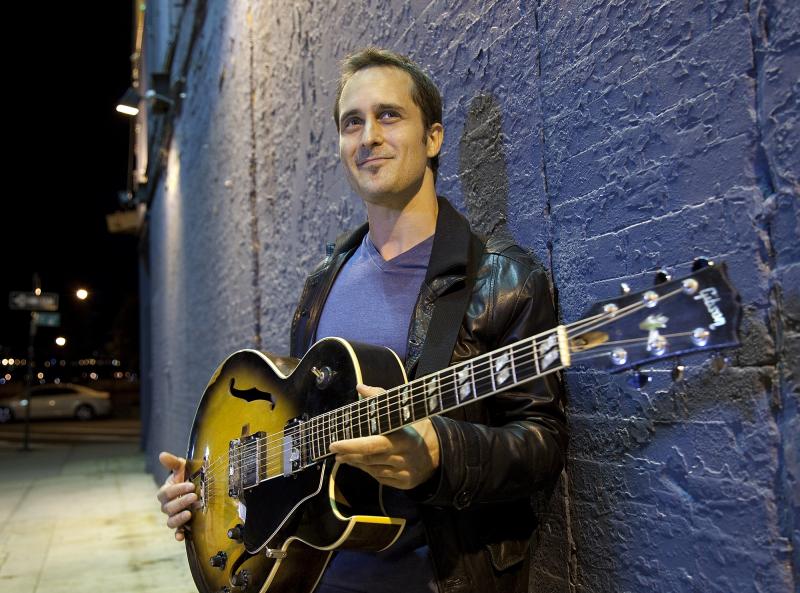 BY MARTA RAMON
November 22, 2012
Sign in to view read count
Jonathan Kreisberg has filled a gap in the international jazz scene. This New York-based guitarist started with both rock and classical music, but from the beginning he paid attention to his father's great jazz music collection. For Kreisberg, jazz is a pure music based on feelings. He says that he first experienced the creative part of music by ear until J.B Dyas, his teacher in the New World School of the Arts, showed him how jazz worked.

His charismatic sound and his open conceptualization of music led him to take his place, as sideman or band leader, with musicians like saxophonist Lee Konitz, vibraphonist Joe Locke, organist Dr. Lonnie Smith, drummers Lenny White, Donald Edwards, Ari Hoenig and Bill Stewart, bassist Larry Grenadier, and many others.

During its current European tour, his new quartet-saxophonist Will Vinson, bassist Rick Rosato and drummer Colin Stranahan- opened the famous Jimmy Glass International Jazz Festival in Valencia, Spain. Kreisberg presented his last CD, Shadowless (New For Now, 2011), but the public also got a taster of his upcoming album, One, which is due to be released in December. Kreisberg weaved a rich concert where different languages met through meaningful improvisations. And as he plays, he talks: Kreisberg is open and eclectic. Because, like when he improvises on a stage, he forgets everything when he sits down to reveal himself in a conversation, with a beer on the table.

All About Jazz: When did you realize that you wanted to express yourself through jazz?

Jonathan Kreisberg: I discovered very young that my string was being creative and being, maybe, possessed by the music. So even though I was learning scales and things about music, I was already making up songs, being creative, writing pieces or just playing freely. I just played music. So I think the tendency to improvise came very early.

AAJ: What does your wide musical experience give to you as a jazz artist?

JK: Because of my background, maybe I have a different way of expressing myself through jazz. Many guitar players start learning jazz and immediately they learn the music of Wes Montgomery or Charlie Christian, but I wasn't originally attracted to it. Now, of course, I believe those two guys are geniuses, but at the beginning my favorite music was listening to [saxophonist] John Coltrane and [trumpeter] Miles Davis, but then listening to Eddie van Halen and blues and rock players. Very different ways of expression. And then, Jimi Hendrix, John Scofield, Pat Metheny and George Benson. Then I realized there was a reason: Coltrane influenced all the others, there was a connection. They gave me a different way to think about the guitar.

AAJ: So do you think you're developing a different voice in the jazz scene?

JK: [Smiles] You have to answer that question. You can tell me...

AAJ: It is difficult to set guitar players apart from the rest because there is a lot of competence, and you have done it. Now you can tell me about it.

JK: [Smiles] You have to listen to music to answer that, I just play...

JK: [Laughs] No, I mean for me the way we play is always a series of many, many, little choices, small choices, and usually for players that have their own voice every choice is always influenced what they love and also because they are looking for something different. And doing this over the years many times you develop your own voice.

AAJ: Talking about choices, from the beginning of your career you have chosen your bands and with whom to play. You have always decided what you wanted to play, being faithful to your thoughts when many other musicians do different kind of gigs to survive. Is that position a life philosophy, like you prefer to be happy rather than to fill your wallet?

JK: That's a good question. I built my life on this idea: for many, many years the choices that I made were that I really wanted to do, even when I was a small kid and my mum said to me "Jonathan, come to dinner with the family" and I said "No, mama, I wanna play music right now," and I skipped dinner because I just wanted to play. These are choices. The idea for me was to build my life, to have a life full of music that I love. So I have said no to things, because I always choose. When I moved to New York I got calls for money gigs and I didn't go, because I said to myself that I was in New York to play jazz. And when I did that it was very hard and sometimes I thought I should do it to get the money while I was eating from a can, but then I thought it was ok because things were going to happen. And something happened.

AAJ: Your European tour is approaching its end; what did you get from it?

JK: For me, every tour is an adventure. This time it was different because it is the first time I'm playing with Rick Rosato, and he brings another kind of energy to the band. For the most part my life is many gigs rolling, so it's a process. I take this tours like a developing as a musician. For me it is a great experience to travel and to play for new people. I just expected to keep finding new music.

AAJ: You are presenting your last CD, Shadowless. In contrast to the previous one, Night Songs (Criss Cross, 2009), this is mostly your own compositions. What's the main work difference between these two albums?

JK: Shadowless is a personal CD, it is definitely a lot of blood, a lot of sweat, because when I do all the originals it is a lot of work. And when you finish you feel exhausted. And definitely Shadowless is one of those albums. It's like you need breathing.

AAJ: Do you think it is a step forward?

JK: As musician, I always look to make a step forward. Development is necessary. We can always learn from early recordings about ourselves, or other musicians. We try to keep developing. I like when I play in a concert and people say they like a song and it is a new one, because that means they're feeling the new stuff.

AAJ: What changes can we find in Shadowless?

JK: There are different feelings, there is a kind of energy that I like. But the music of South of Everywhere (Mel Bay, 2007) had also a nice energy. To me both two albums are a kind of continuation...

AAJ: Nowadays you are working on a new project, One. Why a solo album?

JK: So I bought a couple of good microphones to record the acoustic guitar, and in summer every time I had something I liked I recorded it. And I recorded things that I didn't like, but one day I recorded something and I thought it was nice. I just had one song, it just started with one song. And I said, "This can happen." With that song I could imagine the whole CD.

AAJ: What's the main point of this record?

JK: Respecting the traditional sound of guitar, but finding new ideas, making it exciting. I didn't want it to be like another normal guitar record. So then I also bought a new beautiful acoustic guitar, a nice one from a small company, Indian Hill, and I really loved it. A weird, strange, sound from the acoustic guitar, it is almost between an acoustic and a gypsy guitar. And I used it for a couple of songs and I started using different guitars for different sounds. Everything without loops, I wanted everything to be one person playing. One: it's a simple idea that traps. So it's something you can hear, and that was the only rule: everything else could happen. The only rule was everything had to be one performance on one song.

AAJ: Is it difficult to find a balance in that kind of album?

JK: The first track of the record was very easy, and then I started thinking about the whole piece. And then it became a little bit difficult. I said "I have this, and this, but I need something else." So at the end I had a couple of things that were just improvising, those are a kind of different. The album has some interesting choices, the last two songs are the most traditional thing on the record, after the most crazy things on the record. I think the ending is a very interesting ride, a journey.