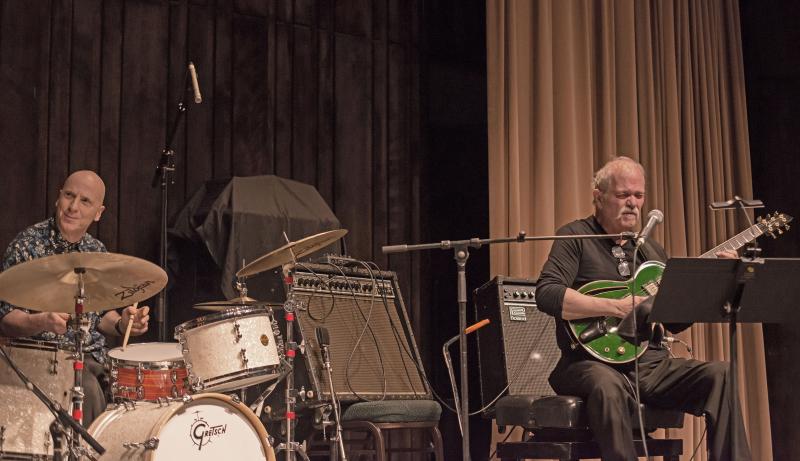 It's always a treat to see some of your jazz heroes performing in your hometown, but it's an even greater pleasure to see some of them performing together in the same group. Guitarist John Abercrombie, pianist Marc Copland and bassist Drew Gress have been working together for nearly two decades, and they've all found their way to Ottawa, Canada at one time or another. But the chance to hear, in concert, the trio that—with Billy Hart on drums and under Copland's titular leadership, first released Second Look (Savoy Jazz) in 1996, and followed that record up with 2008's Another Place (Pirouet)—reunited in the spring of 2013 to record 39 Steps (ECM, 2013), with the relentlessly surprising drummer Joey Baron replacing Hart, was a dream come true.

A dream clearly shared by many in the packed house at Library and Archives Canada—once a regular spot for the festival's late afternoon Connoisseur Series, but dormant since the retirement of the venue's Randall Ware a couple years back. This was a quartet that truly exemplified the concept of collective improvisational freedom. Beyond a set list that, other than an opening warm-up for the group—a sublime reading of "I Should Care," subsequently introduced by Abercrombie as, "or, as the late, great Jim Hall called it, 'I Should Care...But I Don't'"—seemed to be put together on the spot, as Abercrombie conferred with his band mates to decide what they should play next, it was the complete and utter relaxed way that all four musicians played together that made each and every piece in the 90-minute set a gem.

For the most part, how the group found its way into and out of a tune seemed completely up for grabs, and while the melodies and overall structures of the few songs culled from 39 Steps—"Vertigo," "Greenstreet," "As it Stands" and "Another Ralph's"—were, indeed, familiar, the interpretive nature of the quartet made every moment fresh, every solo more than a feature for a single player; instead it was an holistic collaboration where one member was simply, at that moment in time, in greater focus.

Abercrombie's equally laid-back nature and dry wit helped make the concert the kind of warm experience that was ideal for a cold winter's night. He suggested that the reason the group opened with a familiar standard like "I Should Care" was that they are "nice tunes to play: you know them so well that they're like old friends; you can get real with them." As the guitarist introduced a rewrite of a song he wrote more than four decades ago, and which first appeared on his 1975 ECM debut Timeless—"a waltz that I wrote at Ralph Towner's apartment on his piano," Abercrombie quipped, "so I called it 'Ralph's Piano Waltz'"—the guitarist went on to explain that when he wrote 39 Steps' "Another Ralph's," "I started playing something that reminded me of it ["Ralph's Piano Waltz"], with a similar melody but transposed and with different harmony. So I plagiarized myself. Stealing from yourself is really an odd thing; you don't get much out of it...it would be a lot more profitable to steal from others....a life in music, a life in crime; maybe I could combine the two," he bantered, as he wrapped the intro by describing a book by Jack Higgins, where the protagonist did just that—a cat burglar who then goes to the opera to play piano.

Engaging between-song patter aside, it was the group's easygoing rapport—rarely burning, but simmering often, with Baron's unexpected but always relevant punctuations and all sorts of other inside musical jokes keeping the mood not just light but, at one point, driving Baron and Gress to almost uncontrollable laughter—that made the depth of interaction in this last date of the group's short tour truly palpable. This wasn't the kind of obvious musical connectivity to which players sometimes resort; instead, this was about subtle movements, the slightest turn of a phrase or delicate nuance that could drive the entire group in a completely different direction, even as it remained faithful to the overall structure of the song. At one point, during one of Baron's solos, a more overt drop in tempo had the whole group laughing—and, once everyone came back in, magically mirroring Baron's move with the kind of profound synchronicity rarely heard onstage or in the studio.

As individual players, there's little to be said. As terrific as Abercrombie's last dalliance with piano was, as a leader, back in the late '70s with the tremendous Richie Beirach, Copland may be his most ideal foil yet, with a similarly delicate approach to touch, to harmony, and to allowing notes to decay to their inevitable conclusion. Both players avoid signature phrasing but, instead, are distinctive because of other, more elusive qualities. The same goes for Gress—a bassist who can swing his ass off when required but, as his work with Claudia Quintet and his own recent The Sky Inside (Pirouet, 2013) demonstrate, is equally at home in more avant territory. Baron, too, seems comfortable in any setting, whether it was the mainstream but similarly emancipated trio with whom he played this past summer in Ottawa, alongside pianist Steve Kuhn and bassist Steve Swallow, or more left-of-center turf with musicians like John Zorn.

But at the end of the day, it's all music, and all a single continuum. Trumpeter Enrico Rava, in a public interview after his 2009 performance in Mannheim, Germany, alluded to free jazz of the 1960s as not really being free because there so many restrictions. He spoke of music now being truly free, and it was a similar aesthetic that imbued Abercrombie's Ottawa show. The music may have been elegant and playful, but it was also completely unfettered and free. It was the inimitable connection between these four musicians—Baron may be new to this particular group, but has been playing with Abercrombie for more than a decade, beginning with the guitarist's "string group" first heard on 2002's Cat 'n' Mouse (ECM)—that made their Ottawa performance something truly special...an evening filled with oblique beauty and unrelenting surprise, but in the most delicate and graceful manner imaginable.