Page One is the first of many great records in Henderson's long, distinguished career. 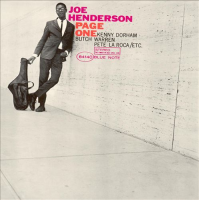 Joe Henderson is one of those jazz guys who made such a spectacular comeback late in life that you tend to forget how good he was in the beginning. Page One is all the evidence you need of Henderson's early heroics.

Let's start at the end.

The last four albums of Henderson's long, outstanding career were arguably his very best. Each was a tribute to music's past and each was amazing. In 1992, there was So Near, So Far (Musings for Miles). Later the same year, there was Lush Life: The Music of Billy Strayhorn. Two years later, in 1994, there was Double Rainbow: The Music of Antonio Carlos Jobim. And finally, his last album, in 1997, was Porgy and Bess. He died in 2001.

For any artist, these four records would be the highlight of a career. Each one is worth owning. But if you go back to the beginning of Henderson's career, you'll find another set of great albums.

Page One, from 1963, is Henderson's first as a leader, and quite possibly the best of his early recordings. The band is first-rate. In addition to Henderson on tenor, there's Kenny Dorham on trumpet, McCoy Tyner on piano, Butch Warren on bass and Pete LaRoca on drums. (Funny note: Tyner is actually uncredited on the album cover, which lists the other four musicians plus "ETC." Blue Note was afraid to openly acknowledge Tyner because he had just signed with another label. But that's him on the record.)

The Latin-style pieces ("Blue Bossa" and "Recorda Me") are delicious precisely because they're not your typical Stan Getz-Jobim bossa novas. Think, instead, of a cross between bop and bossa—mid-tempo Latin grooves that gently swing. Dorham puts a weird vibrato on his horn, Henderson sounds bold and very Sonny Rollins-ish, and Tyner has an unusually (for Tyner) flowery touch.

The two bop numbers are fantastic toe-tappers. "Homestretch" features some really nice unison playing by the horns. And "Jinrikisha" has the well-known Tyner block chords backing a Henderson solo that sounds a lot like John Coltrane. (Not a huge surprise because one year later Tyner would back Trane on the all-time classic A Love Supreme.)

Finally, the ballads. "La Mesha" features Henderson sounding sad and soulful, and Dorham sounding sweet and simple. But my favorite is the aptly named closer, "Out of the Night," a smoky blues that does, indeed, sound like it was recorded at midnight. Down, dirty and, well, bluesy.

Page One isn't my favorite Joe Henderson record (I prefer the later masterpieces) but it is an outstanding record indeed—the first of many great records in a very long, distinguished career.

Availability: Many used copies for $2 to $3 on Amazon