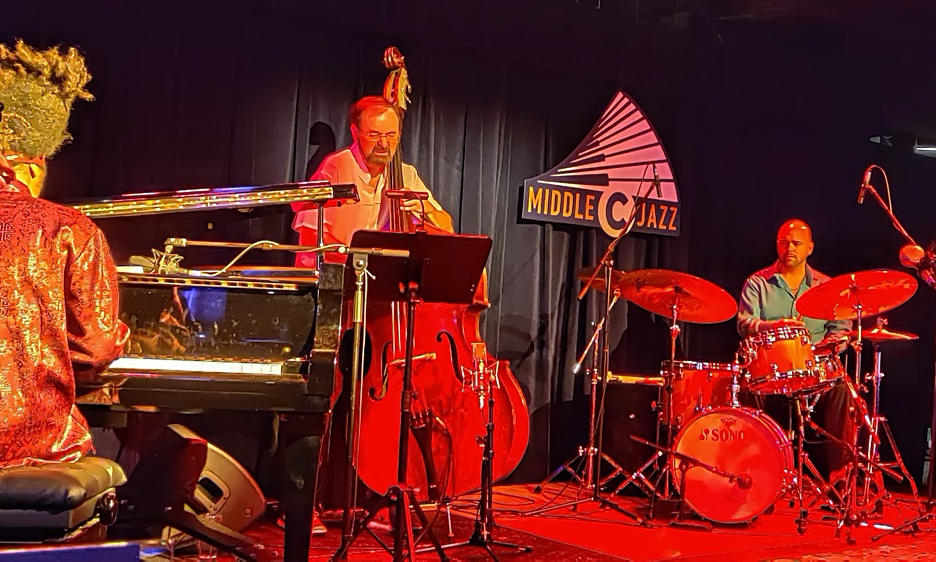 Drummer/composer/bandleader Joe Barna brought his band Sketches of Influence to Middle C Jazz (a recently opened jazz club in Charlotte, NC) to record a live album on March 13-14, 2020. Barna had come down from upstate New York to check out the club when it opened, and knew he wanted to be part of the family. Like everyone else, neither he nor the staff of Middle C Jazz anticipated a pandemic. Yet the show went on, despite the gathering storm clouds: there had already been a long list of cancelled public events. The audience was much smaller than normal, but made up for it in enthusiasm. Middle C Jazz Director Jonathan Gellman pointed out the microphones aimed at the audience, and Barna joked that Pro Tools digital recording software offered automated settings for different kinds of audience sounds.

Barna began by explaining the meaning of the band's name. "Sketches" comes from the musical term for an informal score, often made in preparation for a formal composition; and "influence" refers to his habit of composing in response to people he knows. So the opening tune "Oh Feline, I'm Glad You're Mine" has a Cole Porter-style melody because it was written for the mother of his daughter Savina Jewel, who is fond of Cole Porter songs. He introduced the band: pianist Davis Whitfield, saxophonist Stacy Dillard and double-bassist Otto Gardner. He made a point of frequently reintroducing them throughout the set, commenting that although he composed the book, the whole band made the music, not just him.

The tune did have the happy sound he promised, delivered by Dillard's tenor saxophone. A distinctive composition as well, with a contrasting double-time section in three answering the melody. "A Rose For Pam" was a Latin tune—not nearly as sweet as the title implies—with soprano saxophone replacing the tenor. There was an elaborate story behind "Children's Song." Barna had noticed a young woman at several New York City shows. Her name was Saadet, and she was visiting from Turkey, so she wanted to hear as much jazz as possible while here. She said yes to a song in her honor, and Barna wrote it quickly (in about ten minutes) right in front of her. It is a lovely slow waltz, which inspired a very melodic solo from double bassist Gardner (a hallmark of all of his solos on this night). Dillard threw a brief "Straight No Chaser" quote into his tenor solo.

Everybody knows about "The Grind"—it's the work week that makes a Friday night jazz show especially sweet—and Barna announced that the title of the live album was going to be The Grind: Live at Middle C Jazz. Next the band pared down to a trio to feature pianist Whitfield. Barna wrote "Ivory Romance" (about being in love with the piano) for his mentor, upstate New York pianist Lee Shaw (who also taught keyboardist John Medeski, among others).Whitfield provided a rhapsodic unaccompanied opening. He had been tearing up the piano all night, but this was a definite highlight. "Nine Maple Syrup" was about the 9 Maple Avenue jazz club in Saratoga Springs, New York where Barna had his first jazz gig (and where he continues to perform to this day). It was a funky set-closer that recalled Herbie Hancock tunes like "Watermelon Man" and "Cantaloup Island." It featured Barna's first drum solo of the night, and even that was more groove-oriented than average. He is clearly more interested in composing and band leading than demonstrating his drum chops.

The same could be said of the whole group. All strong players individually, but committed to the overall sound. In short, this is a real band, an increasingly rare and wondrous thing. Stepping outside of the club, the lack of street activity uptown was immediately noticeable. It was hard to avoid feeling like this had been The Last Jazz Show. And in fact after the last set on Saturday night Middle C Jazz announced that they were suspending operations until April. These recording shows were swimming against the tide, but were no less satisfying. We can only hope that the present suspension of live shows can be survived by clubs like Middle C Jazz and the musicians who play there.