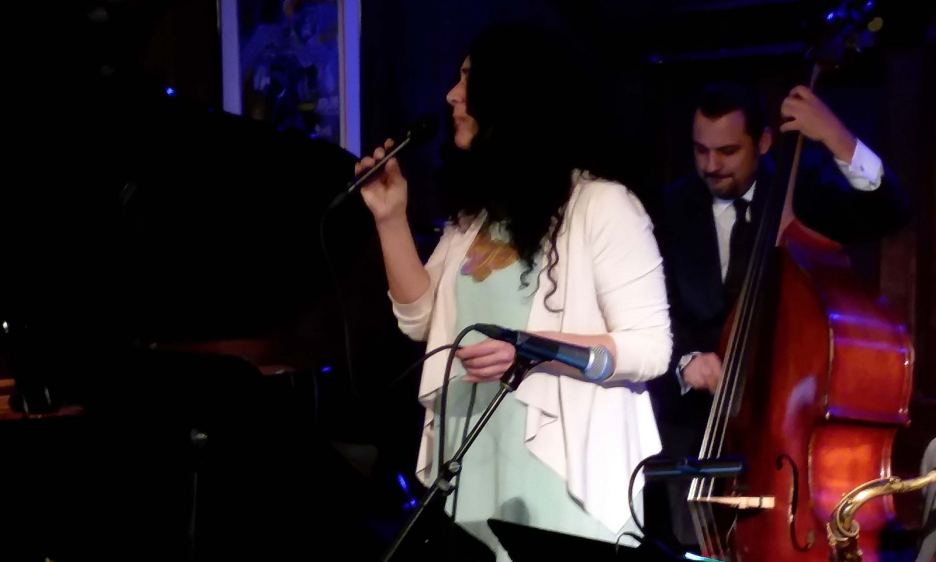 The content of this show came as a complete surprise to this reviewer. I expected vocalist Joanna Pascale, who is by now a Philadelphia legend, to sing a typical set of standards from the Great American Songbook. Instead, she blew everyone away with a set of Italian tunes that I usually hear in the background at a little coffee shop called Anthony's in South Philadelphia! What was going on here?

What happened, according to her own spoken narrative, was that Pascale recently became interested in her Italian ancestry when she discovered an old, broken-down violin in the attic and traced it to a grandfather who played it and made some 78rpm records in Italy. Her Italian roots emerged big time, and she decided to honor her heritage. (With the infusion of European jazz in recent years, musicians have frequently played songs of diverse ethnicities, so Pascale was riding a trend.) She served as singer, band leader, arranger, narrator, and producer/director of a show that could have wowed them at the Sands in Las Vegas, one of Frank Sinatra's old haunts. Dressed and coiffed Italian style and a superb story-teller, Pascale generated what was virtually a theatrical event.

Fortunately for the jazz-loving folks in the crowd at Chris,' she and her group of superb musicians (Jim Ridl on piano, Larry McKenna on tenor saxophone, Matthew Parrish on bass, and Dan Monaghan on drums) were able to convey the sense of an Italian Festa while swinging and improvising with all the panache of a top jazz ensemble. The combination generated waves of enthusiasm in the packed house, who—aside from her family who were there—were probably as surprised as me.

The set began with the potboiler "Come Back to Sorrento," a ballad which Pascale milked for all its sentimentality, her voice beautifully capturing the Italian inflections. Ridl inserted some subtle jazz changes, and Monaghan gave it a rhythmic pulse that could have done well in Kansas City in the time of Papa Jo Jones. Thanks to the genius of the best jazz musicians who move easily among genres, it worked!

Opera great Mario Lanza grew up in South Philadelphia and has a park named after him. Turning to pops, his biggest hit was "Be My Love," which in Pascale and the group's hands evoked a feeling of an Italian wedding when the newlyweds slice the cake.

The jazz emphasis returned with an offer you can't refuse: a perfectly crafted solo by McKenna on "Promise Me You'll Remember" (the theme from Godfather III). The haunting song "Estate" covered by many Brazilian musicians such as Joao Gilberto, earned its place because it was composed by an Italian, Bruno Martino, and was given extra flair by a marvelous Stan Getz bossa-inflected solo by McKenna.

All the while, the ghost of Frank Sinatra seemed to be present in the room. And Sinatra got his due with an arrangement of "The Best is Yet to Come" that swung with his signature rhythm changes and accentuations. Next, there was a not-so-familiar song "What Have You Taught Me to Do?" It is a song about the disillusionment that comes after a first romance which Pascale sung in Neapolitan dialect and then in English translation. Finally, Parrish's artful bass cadenza introduced the ever popular "Volare," with audience involvement ("oh oh oh oh!") rarely heard at a jazz club. Pascale had effectively transformed a darkened jazz club into an Italian block party!